Hel moved up to 126 pounds this year, and so did the wrestler who defeated him last season, Byron’s Mitchel Petersen. Plus a roundup of other action and top wrestlers who advanced. 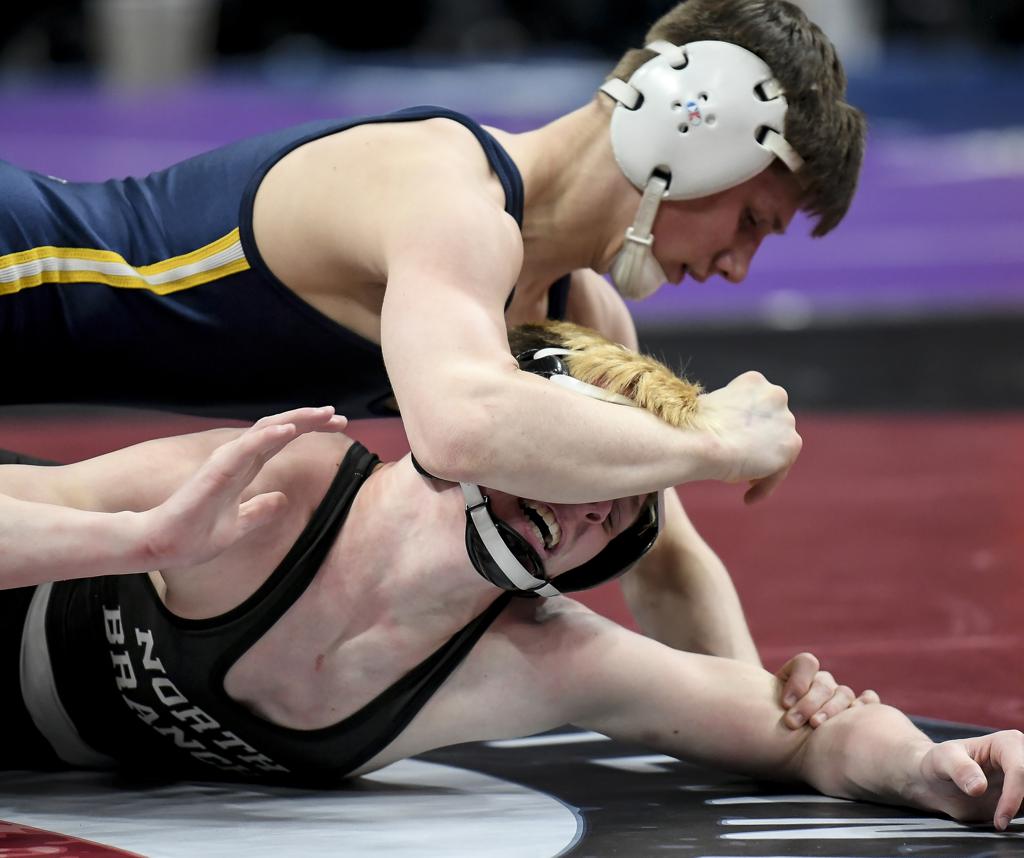 Totino-Grace senior Jake Svihel, a three-time state runner-up, has one more shot at a wrestling state championship Saturday at Xcel Energy Center. Svihel moved up to 126 pounds this year, and so did the wrestler who defeated him last season, Byron’s Mitchel Petersen.

Petersen, a junior, said the two are friends and wrestled at Pinnacle Wrestling School when they were younger. They are the top-ranked wrestlers in the weight class in Class 2A.

“Last year, I let my nerves get the best of me,” said Svihel, who takes a 55-0 record into the semifinal. “This year I’m kind of turning that nervous energy into positive energy, trying to control what I’m thinking, block out all negative thoughts.”

Pickell, a junior, said it gave him motivation coming back to the tournament not the defending champion.

“Honestly, it’s a lot more pressure, too, though,” he said. “Because a lot of people are looking at you thinking you’re going to win the state title like it’s nothing, but every match is still a grind up here.”

Pickell moved up a weight class to 132 and will seek his third state championship on Saturday.

Kellen Schauer of Grand Rapids became the school’s career leader in wrestling victories with 241. A senior, he reached his first individual semifinal after an elbow injury in last year’s postseason ruined his chances.

“I love this tournament. It’s just so much fun competing here,” Schauer said. “Nothing like it in the world.”

A wide smile stretched across the face of Kenyon-Wanamingo 120-pounder Jeron Matson after he pinned Isaac Tellers of United North Central in Friday’s first round.

Matson, a senior, was back in his element, a place where he won individual state championships in 2016 and 2017 and looked poised to join the exclusive club of four-time state champions.

Things went south in 2018, however, when Matson was among four Kenyon-Wanamingo wrestlers to break an undisclosed school rule and be sent home from the tournament, leaving the team shorthanded and ending his dream of a third straight title.

“It feels good just to be back after what happened last year,” said Matson, who advanced to Saturday’s semifinals with a 5-4 victory over Kelvin Andrade-Ponce of Atwater-Cosmos-Grove City in the quarterfinals.

Matson’s comeback year was almost derailed by a torn meniscus is his right knee, which required surgery five weeks ago. It only steeled his resolve to make the most of his senior season.

“The knee’s a little sore, but it’s about as good as you can get it,” he said. “You’ve got to appreciate all the opportunities that come in life and take advantage of them.”