The Eagles senior saw an opening and used it to win his first individual state championship. Plus other news and notes from Class 3A. 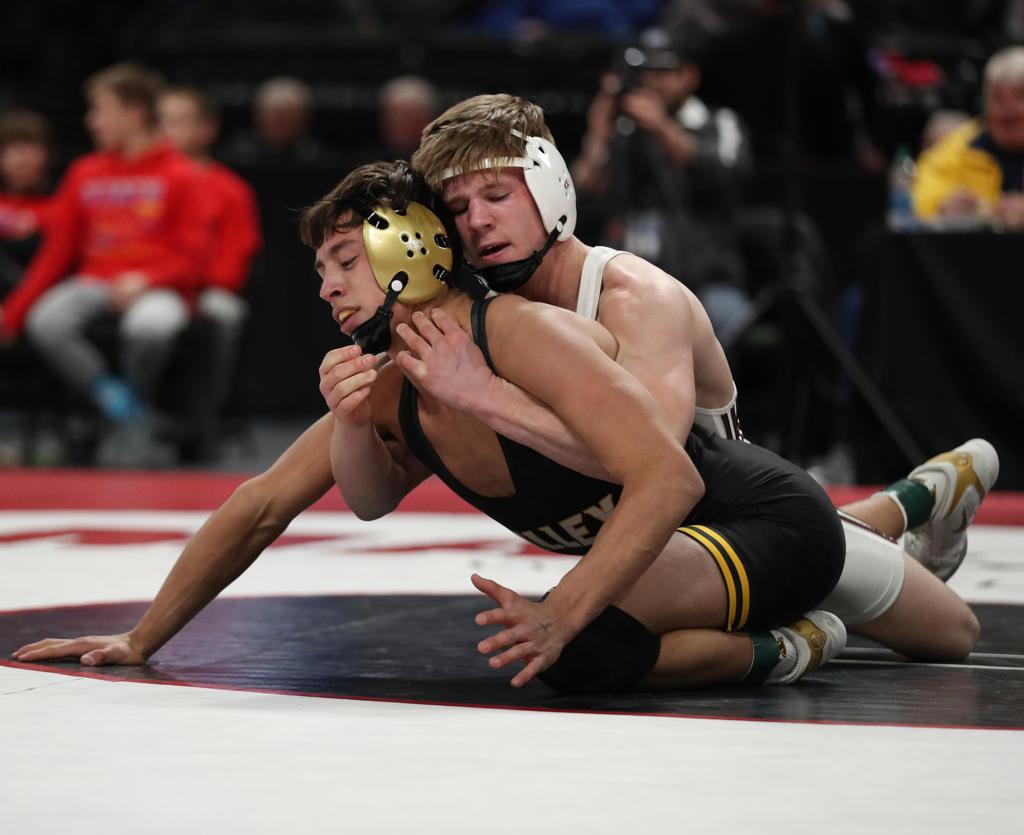 It was a little piece of advice, one that Sebas Swiggum had heard endlessly in his 12 years of wrestling training, that proved the difference as the Apple Valley senior pulled out a 3-2 victory over top-ranked Drew Woodley of Northfield in the 138-pound final at the Class 3A tournament at Xcel Energy Center on Saturday.

Swiggum trailed Woodley 2-1 late in the final period when that piece of wisdom paid off.

“I never stop to take breaks,” Swiggum said. “I caught Drew taking a break. He looked over at the clock. Right at that moment, I took a shot. A double-leg. I was just throwing a wild card in there and I ended up scoring on it.”

Swiggum beat Stillwater’s Trey Kruse 3-2 in the semifinals, gaining a measure of revenge for a 9-2 loss to Kruse earlier this season. Swiggum said the way he won — beating Kruse and then the No. 1-ranked Woodley — was significant.

“It makes it that much special to me,” he said.

It was the first state championship for Swiggum, who was runner-up at 132 pounds in 2018.

The toughest part of the season for Shakopee’s Pierson Manville was getting used to his new home. The wrestling took care of itself.

The 106-pound seventh-grader, the latest potential star in the wrestling-mad Manville family, pinned Lakeville North’s Jore Volk at 2:19 of the finals to win his weight.

Pierson and older brother Carson moved to Shakopee this year after living in Pennsylvania last year. Both were key contributors to the Class 3A team championship the Sabers won Thursday. An injury kept Carson out of the individual tournament.

“That was amazing,” Pierson said of the team victory. “I was so proud of my teammates.”

He said that coming to Minnesota meant getting used to a new home, making new friends, going to a new school and getting acclimated to the weather. Thankfully, he found refuge in the wrestling room.

“That helps,” Manville said. “Wrestling is wrestling. And having Carson there to give me advice and help me.”

Time was running out on Paxton Creese. The Shakopee junior was on the verge losing for only the second time this season, trailing Winona/Winona Cotter’s Ryan Henningson for most of the 113-pound final.

With 30 seconds to go, it was time to make something happen.

“I just wanted to cut him and get a takedown,” Creese said.

That gave Creese a 6-5 lead, but there was still time left. Hemmingson responded with a furious challenge and nearly regained the advantage before the clock ran out.

“I was just holding and squeezing my arms as hard as I could, hoping to make it to that buzzer,” Creese said.

Coupled with the Sabers’ Class 3A team championship, Creese, who finished the season 53-1, found himself at a loss for words.

“I’m speechless right now,” he said. “This has been a hell of a year for our team and me and everyone who was a part of this journey.”

• Stillwater sophomore Reid Ballantyne won his third consecutive state title with probably his most impressive effort of the meet, pinning Buffalo’s Ryan Scherber in only 29 seconds to win at 126 pounds.

• Lakeville North’s Bryce Benhart defeated East Ridge’s Marco Cavallaro 7-0 to win the heavyweight championship, completing a 34-0 season. Benhart, a highly sought-after offensive lineman for the Panthers football team who signed with Nebraska in December, said before the finals that a victory would be the right way to end a perfect year. “To be undefeated in wrestling and football is pretty special,” he said.

• Little Falls’ Gabe Nagel finished 46-0 after winning the 160-pound championship when his opponent, Woodbury’s Brock Rinehart, was disqualified for an illegal move.

• Zach Glazier of Albert Lea won his second consecutive state title and completed a 46-0 campaign with a 1-0 victory over Cade King of Owatonna, who was also a defending champion, at 182 pounds. Glazier won at 170 a year ago; King was the defending champ at 182.