The Eagles senior, competing at 126 pounds, was a three-time state runner up before Saturday afternoon. Plus other news and notes from Class 2A and 1A. 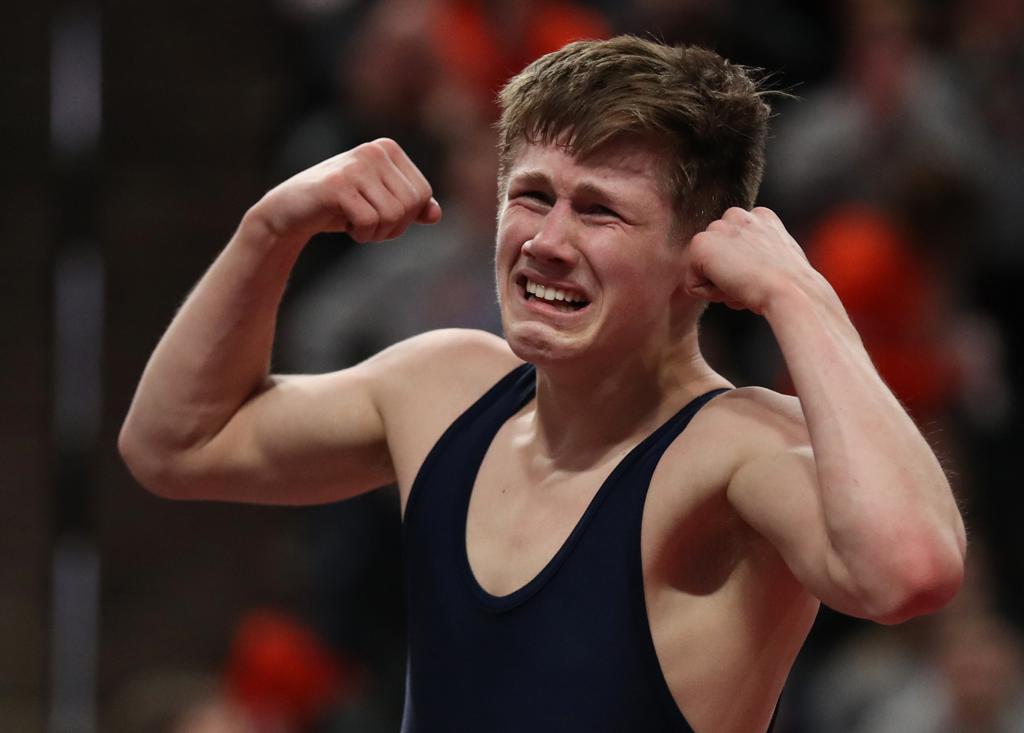 It took Jake Svihel four tries, but in his final high school wrestling match he went out as an individual state champ.

Svihel, a 126-pound Totino-Grace senior, was a three-time state runner up before Saturday afternoon. Now he is a champion, after defeating childhood friend Mitchel Petersen in a rematch from last season’s 120-pound title match.

“It feels so good. My entire high school career ... I came up short three times, and it just feels really amazing to finally get that,” Svihel said after winning the title match over Petersen, a junior from Byron. “This year kind of my mind-set was just take everything a lot easier, have fun with everything, be a lot more lighthearted and it worked out.”

Mankato West’s 132-pound Charlie Pickell ruined Simley sophomore Ryan Sokol’s dream of winning five state championships when he beat him in the semifinals of Sokol’s eighth-grade year. On Saturday morning, Pickell, a two-time state champ, eyed Sokol down as Sokol came off the mat after taking a semifinal victory by tech fall, setting the stage for a heated revenge match.

“He beat me, took away my dream to be a five-timer,” said Sokol after he won his semifinal round. “I want revenge, and that’s what I plan to do.”

Sokol ended the season undefeated (51-0) by beating Pickell after he escaped from Pickell in the final seconds of the third period and pinned him with four seconds remaining.

“He kept diving, and I knew if he shot into my arm, I could get that hip toss like I got earlier in the match,” Sokol said after winning his first state championship. “And when I hit him with it and I got it, I’m like, ‘I want to pin him; it’ll look better.’ And so that’s what I did.”

Sokol said he won the match for his friend Curtis LeMair, a Prior Lake native and wrestler who died last fall.

Thompson, a junior, transferred to Totino-Grace this year, and each wrestler moved up a weight class to meet in the state championship match. Only one could take first, and Thompson came out with a 10-5 victory and his first state championship with his new school.

“[Maple Grove wrestling] was still family, and yeah it was hard. But I found a lot of guys who love me and would die for me, and that’s what I love about TG,” Thompson said.

The No. 1 heavyweight high school wrestler in the nation, Simley’s Greg Kerkvliet, took his fourth individual state title on Saturday with a pin in 59 seconds. It was the longest match of his individual state tournament.

“It was awesome, I’d say. Once in a lifetime opportunity. So take advantage of it,” said an unfazed Kerkvliet after winning the state title. “My ninth-grade year was the first time in the finals, super nervous, and as the years went on, more and more accustomed to it.”

Kerkvliet, who weighed about 50 pounds less than his competition over the weekend at 230 pounds, said he plans to redshirt next year at Ohio State to gain weight and get ready for the college heavyweights.

Danny Striggow, a junior 220-pound wrestler from Orono, got pointers from his older brothers, who both wrestle at Michigan, after every state match to guide him to the state championship match.

Striggow defeated Kasson-Mantorville’s Garsen Schorr in a 16-5 major decision to join Bobby and Jackson by capturing his first state title. Striggow said he deciding between participating in football or wrestling when he goes to college in two years.

“Every time they come home they’re always talking to me, and telling me what I need to work on,” Striggow said. “Just being mentors, it’s really nice to have both of them.”

A year was a long time for Kenyon-Wanamingo senior Jeron Matson to wait for a little redemption. That explains why Matson couldn’t stop smiling after beating Trevor Janssen of Blackduck/Cass Lake-Bena 3-0 in the 120-pound final.

Matson had won back-to-back state championships as a ninth- and 10th-grader. But an undisclosed team rules violation at the state meet last year forced him out of the meet, costing him a chance at third straight title.

Getting back on top this season and restoring his reputation was the focus this year. It almost didn’t happen after he tore the meniscus in his right knee in early January. He didn’t return to the mat until the Section 1 meet a month later.

“It was regret for a long time,” Matson said. “Once the season came back around, it was like, ‘That doesn’t matter now.’ I was just thinking about going out and doing what I had to do to get another state title.”

Matson said this year’s victory was likely his most satisfying.

“It feels awesome, after last year and winning it just five weeks after knee surgery,” he said. “This year is my last year, so I just wanted to focus on having fun.”