Accused of insubordination and a possible recruiting violation, Matt Everson did not have his coaching contract renewed. He contends allegations against him are either untrue or spun to suit the school district’s narrative. 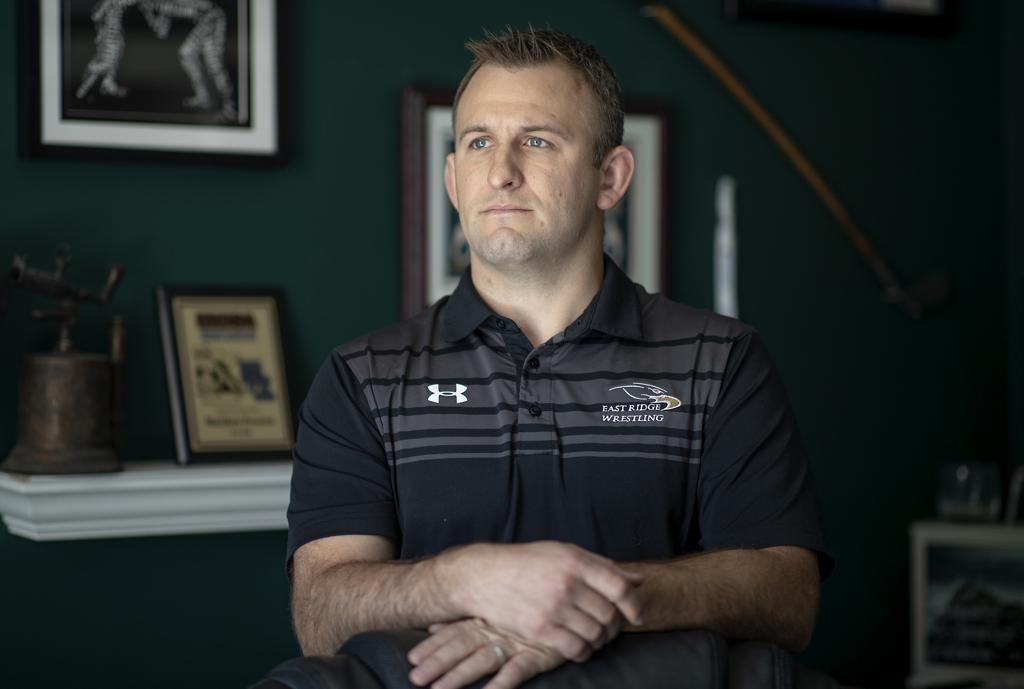 Former East Ridge wrestling coach Matt Everson is pushing back against the school district for what he claims are false reasons that led to his coaching contract not getting renewed. Photo: ELIZABETH FLORES • liz.flores@startribune.com

Matt Everson won 2019 Class 3A, Section 3 Coach of the Year honors for leading East Ridge wrestling to its first state tournament appearance. Several weeks later he learned he was out of a job.

An eight-point letter, made public when Everson lost his coaching position in April, accused him of insubordination, a possible recruiting violation, “demonstrating unprofessional conduct,’’ and more.

The April 25 letter, signed by South Washington County School Board Chair Tracy Brunnette, was written to notify Everson that his contract would not be renewed.

It was made public at the request of Everson, the Raptors’ coach for the past five seasons.

“The things they’ve claimed are either not true or spun to meet a story they want to tell,’’ Everson said in a recent interview. “If all this were true, why would I want to go on record?”

Everson couldn’t have his say at last month’s board meeting when members voted unanimously to not renew his contract. But he plans to use an opportunity to address the board at its meeting on Thursday. He also said he is considering legal action.

Everson’s dealings with one of the families resulted in him receiving a written reprimand on Dec. 7, 2018 for “violating the chain of command,” the letter said.

Everson said Palodichuk refused to further investigate. So he sought opinions from other coaches and activities directors and contacted the Minnesota State High School League. Ultimately, both boys were deemed eligible to wrestle less than 24 hours after Everson’s inquiry to the league.

“If your employer tells you to do something wrong and you don’t do it because you know it’s wrong, is that insubordination?” Everson said. “I wanted to help the family and I wasn’t getting much help from my administration. So I went around her.”

Mick Waldspurger, the school district’s attorney, wrote in an e-mail, “The District has no further comment on this matter beyond what was discussed in open session at the school board meeting and what is documented in the letter that the school board approved.”

Initial conversations with the family, which Everson said started only after the boys were enrolled at East Ridge, drew concerns from the district “about a possible recruiting violation,” the letter said.

A second family, which resides in Woodbury, told the district that Everson convinced them to move into the East Ridge boundaries to wrestle for the varsity program. But when the eligibility of the child was denied, the parent filed a complaint. The district claimed Everson then attempted to retaliate by seeking to have another one of the family’s children removed from the youth program, according to the letter.

Everson said the parents lied about their residency in the East Ridge boundaries. He said he simply suggested they move their younger children, who wrestled in the East Ridge youth program, to the Woodbury program to better align them with their eventual high school.

“They were not forced out,” Everson said.

The letter said Everson violated Palodichuk’s orders by continuing to pursue a cooperative agreement with Woodbury-based private school New Life Academy. Everson said the potential partnership would help give wrestlers an opportunity to compete while helping East Ridge reduce the number of forfeited matches due to not having wrestlers at certain weights. Everson estimated that forfeits were required 65 times this season.

Palodichuk wrote to Everson last Oct. 1 that “the criteria for a cooperative sponsorship arrangement were not met,’’ according to the April 25 letter.