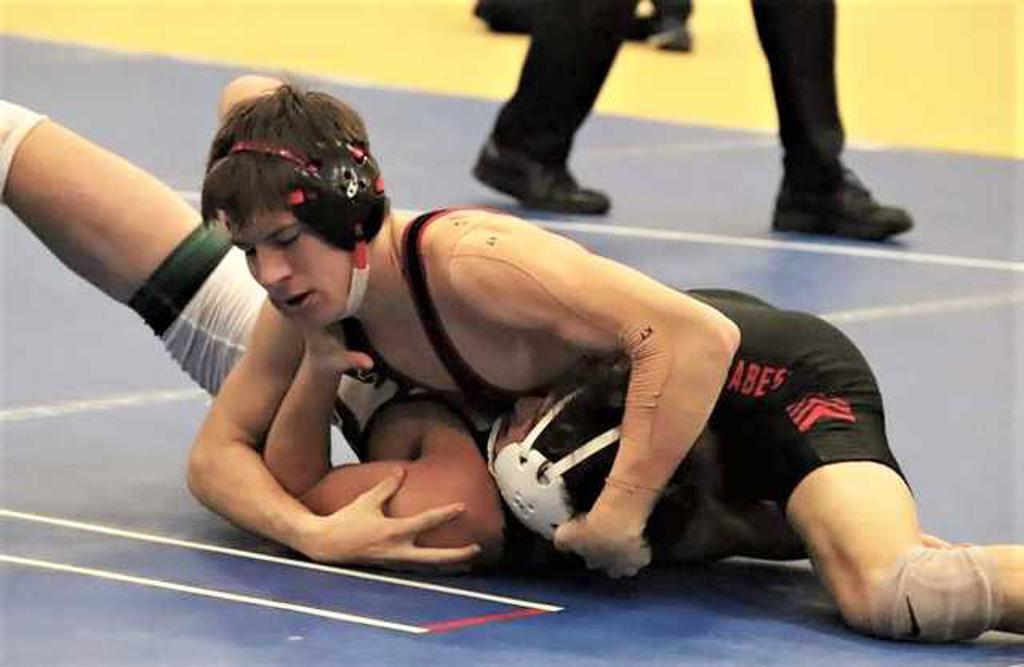 The meet had been a good one for Lunn, a senior 132-pounder, save for a single hiccup that had cost the Sabers a valuable team point in the championship match at The Clash duals in Rochester.

And his mistake was inflating the butterflies in his stomach into fruit bats.

Lunn had been dominant in his weight class, with four pins and two decisions, enough so to be named to the all-tournament team at 132 pounds. But in the finals against St. Michael-Albertville, a problem arose with his headgear. He unstrapped it to fix it, but that’s a violation and Shakopee was docked a team point.

So when teammate Carson Manville took the mat at 170 pounds for the last match of the finals, Shakopee held a slim two-point lead over the Knights.

“I was so nervous, I almost threw up in the last match,” Lunn said. “But I knew we had to stay positive on the bench. Carson coming back to win was everything we stand for as a team.”

Manville’s 6-4 victory secured a 30-25 Shakopee victory and provided an antacid for Lunn’s stomach. It also cemented the defending champion Sabers’ claim to No. 1 in Class 3A.

“A big motivation for us is to maintain what we had last year,” Lunn said. “It’s an accumulation of our hard work and brotherhood on and off the mat. It’s a test of our character.”

The senior won the all-around competition at the MGGOA Invitational. She posted a winning score of 37.65 by winning the balance beam (9.625), taking second in the floor exercise (9.625) and placing fourth in the vault (9.5).

Brake, a 6-foot senior forward, became Hastings’ career leader in points and rebounds in Raiders’ 53-31 victory over Park of Cottage Grove. She scored 27 points in the game and now has 2,252 for her career, and is nearing 1,500 rebounds.

The senior forward led the Gold Bracket of the Herb Brooks Cup tournament in scoring with six goals and an assist. She scored twice in a 5-3 loss to Rogers, once in a 5-1 loss to Holy Family and had a hat trick in a 7-2 victory over St. Paul United.

The sophomore showed why he’s considered one of the state’s top Classic-style racers by winning the discipline at the Mesabi East Invitational. Kraftson won comfortably, covering the Giants Ridge course in 15:05.2.

The freshman led the No. 3-ranked Rangers to the team championship of the prestigious Mesabi East Invitational at Giants Ridge in Biwabik. Parent won the freestyle leg of the meet in 16:59.7, the only racer to finish under 17 minutes.

The 6-1 point guard has paced the Knights to back-to-back victories after an 0-7 start. He capped off the short run with a 58-point effort in a 109-106 victory over St. Paul Washington, setting a St. Paul Conference single-game record.