3A preview: Is Shakopee the next Minnesota prep wrestling dynasty?

The defending champion Sabers are the No. 1 seed in the Class 3A team competition, and the future looks bright, too. 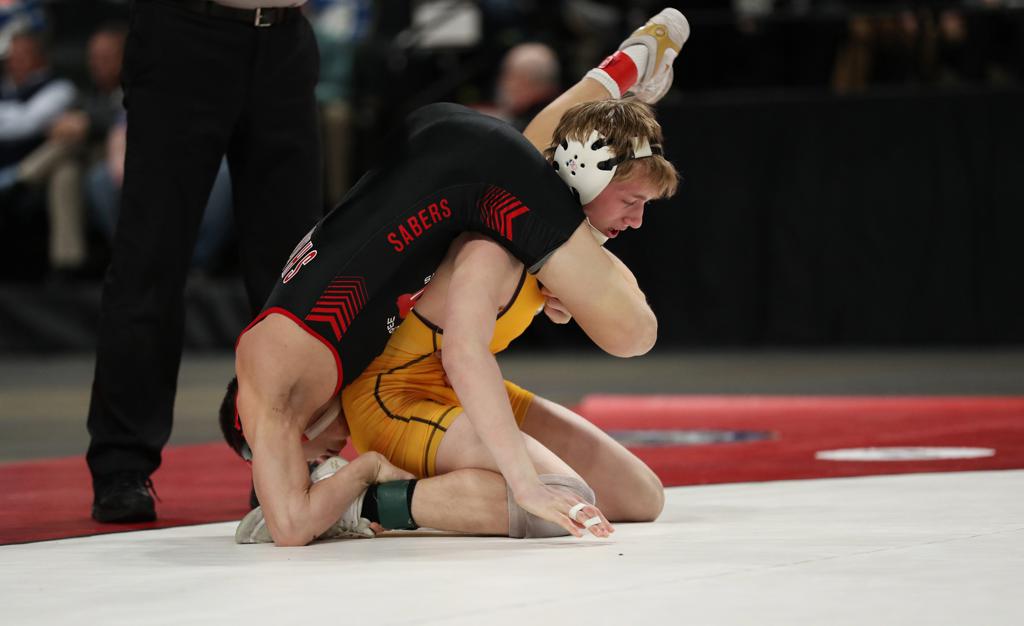 Derrick Cardinal of Forest Lake upended Ben Lunn of Shakopee in their Class 3A 120-pound match, which Cardinal won, in the 2019 wrestling state meet. Both are back in this year's state tournament. Photo: Shari L. Gross • shari.gross@startribune.com

In a sport that lends itself to dynasties — think Apple Valley, Simley, Kasson-Mantorville and Jackson County Central, all having won at least three consecutive state titles in the last 15 years alone — is Shakopee poised to be the next large-school wrestling kingpin?

After falling just short in 2018, losing to St. Michael-Albertville in the Class 3A championship match, followed by winning the 2019 team title, the Sabers look poised to make a run at being the next program to settle in for a lengthy run at the top.

Shakopee earned the No. 1 seed with a 38-0 record that includes a victory at nationally renown Clash Duals in early January and a lineup that includes seven wrestlers ranked No. 1 or No. 2 in Class 3A according to theguillotine.com. The Sabers’ strength is peppered throughout the lineup, making it difficult for opponents to set an optimal lineup even if they win the pre-match lineup.

While Shakopee will lose some of its top performers to graduation — guys like 120-pounder Paxton Creese and 132-pounder Ben Lunn — it will return four high-achieving brothers Pierson Manville (126) and Carson Manville (160), and Joey Johnson (195) and Tommy Johnson (220). All are juniors.

Of course, the team title is far from certain. Both No. 2-seeded St. Michael-Albertville and No. 3-seeded Stillwater present formidable lineups.

Stillwater, in particular, looks tough, with 13 of its 14 starting wrestlers having qualified for the individual competition. That includes 132-pound junior Reid Ballantyne, already a three-time state champion, and 145-pounder Trey Kruse. Both are ranked No. 1 at their respective weights. The addition of sophomore 152-pounder Hunter Lyden, a transfer from East Ridge, has bolstered an already deep lineup.

St. Michael-Albertville defeated Stillwater in mid-January, but the Ponies were battling the injury bug at the time. The Knights, always a force to be reckoned with, refuses to give up bonus points. The program is appearing in its 22nd consecutive state meet.

Toughest weight: While 138 and 160 pounds look brutal, it’s hard not to give the nod to 132 pounds, with No. 1-ranked Reid Ballantyne of Stillwater and No. 2-ranked Ben Lunn of Shakopee, a University of Minnesota recruit. Ballantyne has battled injuries this season, but a meeting in the finals would be a must-see match.

Making it count: Coon Rapid’s heavyweight Gavin Layton has parlayed a successful spring and summer into a remarkable senior season. Layton’s 48-0 record has resulted in a No. 1 ranking but also the senior’s first state tournament berth.