2A preview: With No. 2 already defeated, Simley appears ready to repeat

The Spartans come into the state meet having already knocked off Class 2A title-winning partner Kasson-Mantorville in the section finals. 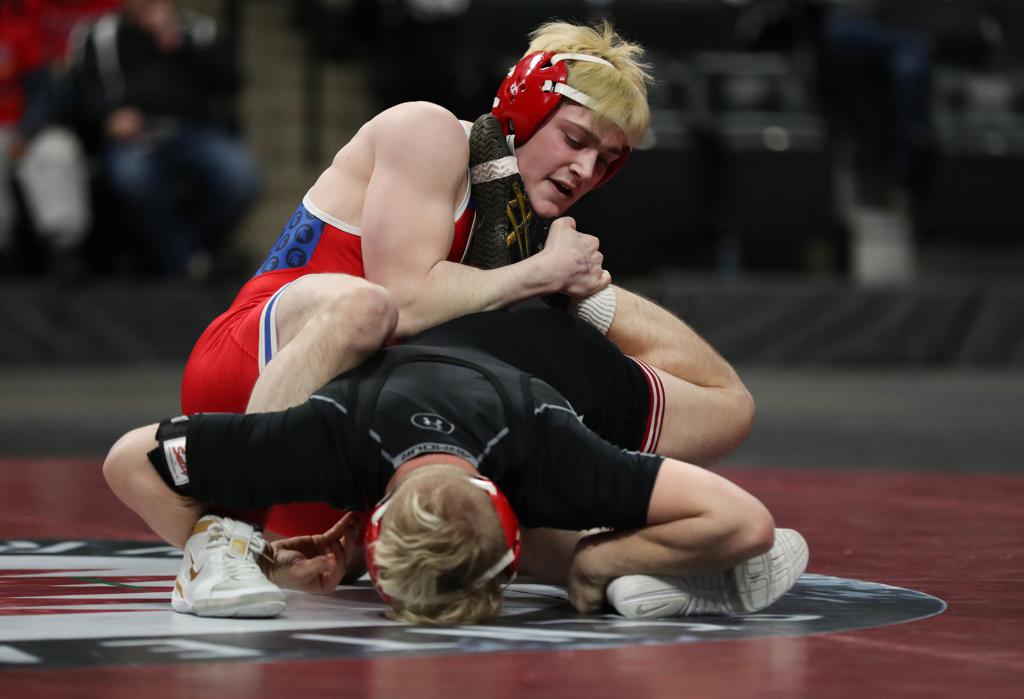 Ryan Sokol of Simley held onto Charlie Pickell of Mankato West in their Class 2A 132-pound match, which Sokol won, in the 2019 wrestling state meet. Sokol will compete again in this year's meet. Photo: Shari L. Gross • shari.gross@startribune.com

With all respect to other Class 2A teams, likely the biggest team match in the class happened nearly two weeks ago when No. 1-ranked Simley upended No. 2 Kasson-Mantorville 46-19 in the Section 1 finals at the Rochester Mayo Civic Center.

Since 2008, the state title has gone to one of those two schools. They were placed in the same section in 2018, resulting in the section final commanding considerable wrestling community attention.

Considered arguably the state’s best team regardless of class, Simley is the favorite to win its second consecutive state championship and 13th overall.

The Spartans feature five wrestlers who carry the No. 1 ranking in his weight class: 113-pounder Reid Nelson, 126-pounder Chase DeBlaere, 138-pounder Cael Berg, 145-pounder Ryan Sokol and 195-pounder Quayin Short, who will wrestle at 182 pounds in the individual tournament. Three others are ranked No. 2: Nolan Wanzek (170), Gavin Nelson (182) and Bennett Tabor (220).

Should Simley stumble, the team most likely to emerge is No. 3-ranked Fairmont/Martin County West, which finished runner-up to Simley two years ago.

Dassel-Cokato/Litchfield and Orono are making their state tournament debuts.

Band of brothers: Talented brothers abound — the Johnsons and the Manvilles at Shakopee, the Rogotzkes at Stillwater, the McEnellys at Waconia and the Godes at Long Prairie-Grey Eagle/Browerville are a few examples. Princeton’s Wells brothers are the only siblings in the meet who have not lost a match between them. Tyler, a freshman 106-pounder, is 43-0 and Zach, a junior 145-pounder, is 40-0. Tyler won the U-15 title at 41 kg at the World Wrestling Championships in Budapest, Hungary, in June.