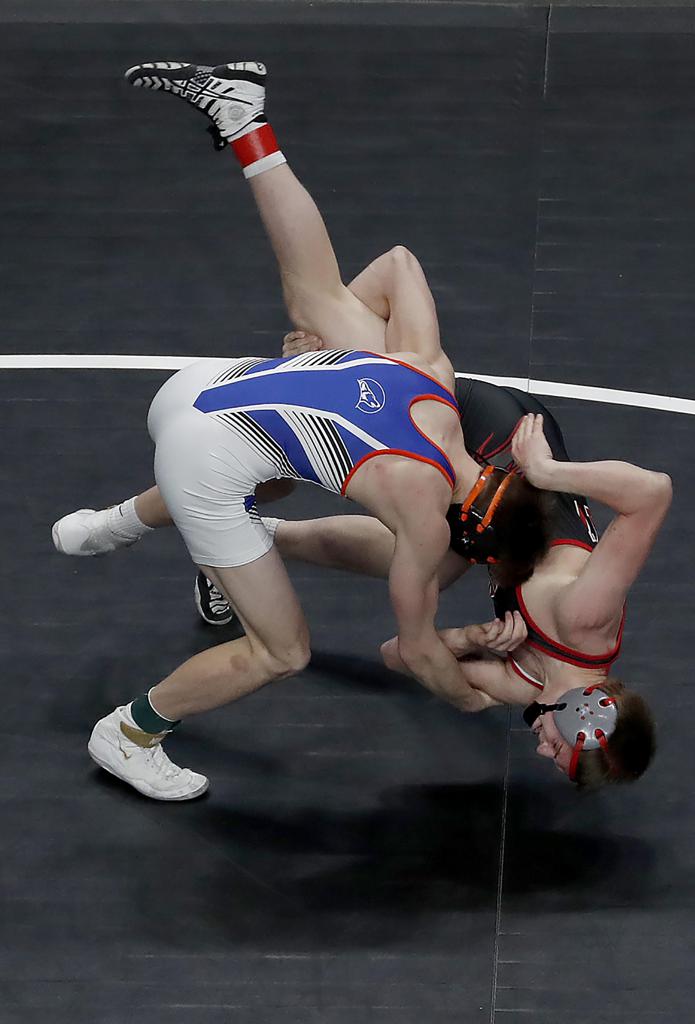 Mason Gode of Long Prairie/Grey Eagle-Browerville defeated Bray Olson of Kenyon-Wanamingo in the 132-pound class at the 2019 state meet. Gode and his brother, Landon,will be both competing this week. Photo: Carlos Gonzalez, Star Tribune

It wasn’t that long ago that Long Prairie-Grey Eagle/Browerville was just another program looking to take things to a high level.

Now, the Wolves are the team to beat.

They built upon their fourth-place finish in the 2018 state tournament by winning the Class 1A state championship a year ago. They returned much of their lineup, had a wildly successful 2019-20 regular season, posting a 31-3 record and are considered the team to beat again this year.

The Wolves are strongest at the lower and mid-range weights, led by the Gode brothers, Landon (132 pounds) and Mason (138).

No. 2 seed Atwater-Cosmos-Grove City (30-1) is expected to present the biggest challenge to theWolves. The Falcons lost a head-to-head matchup 41-15 during the season.

Toughest bracket: All 10 of the ranked wrestlers qualified for the 113-pound and heavyweight brackets and 11 made the 152-pound field (Tallin Johnson of St. James is No. 2 at 160 but dropped down a weight). But at 138 pounds, there’s Long Prairie-Grey Eagle/Browerville’s Mason Gode, runner-up at 132 last year, followed by Kerkhoven-Murdock-Sunburg’s Will Magaard, the 2018 106-pound champ, and Windom/Mountain Lake’s Brett Willaby, who won at 126 in 2019.

Three-peat? Craig Orlando of Bertha-Hewitt/Verndale/Parkers Prairie will be shooting for his third consecutive heavyweight state championship. Orlando is a standout lineman on the football team and signed with North Dakota.