Ben Lunn was moved from his normal 132 pounds to 138 in Shakopee’s victory over Stillwater in the Class 3A championship match. "Team always comes first," he said. 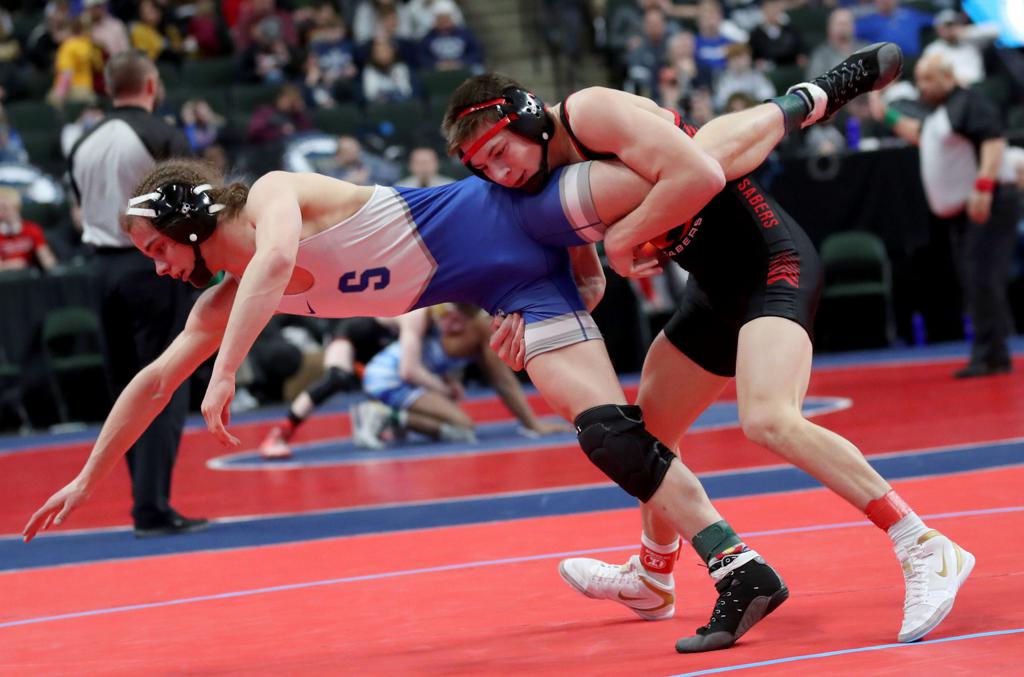 In 3A at 132 pounds Ben Lunn of Shakopee took down Sam Fernholz of Sartell-St. Steophen en route to a win Friday at Xcel Energy Center. Photo: DAVID JOLES * david.joles@startribune.com

Team needs superseded Ben Lunn’s goals Thursday, but the Shakopee senior is still on track to get his ultimate matchup.

Lunn was moved from his normal 132 pounds to 138 in Shakopee’s victory over Stillwater in the Class 3A team championship match, a move coach Jim Jackson did to maximize team matchups. Doing so meant that Lunn, a University of Minnesota recruit, wouldn’t get another chance to meet Stillwater’s Reid Ballantyne, a three-time state champion. Ballantyne had won the only match between the two this season, a tight 6-5 decision at the Christmas Tournament in December.

“Yeah, I’ve been wanting to see Ballantyne all season,” Lunn said. “Team always comes first and I’ll do anything for the team. It’s a little different for the individuals.”

Lunn and Ballantyne both cruised through their matches Friday.

“I still have a chance to [wrestle] him,” Lunn said. 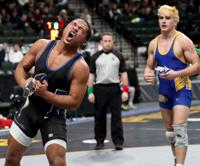 Lakeville North’s Jore Volk and Zach Hanson may be two of the smaller wrestlers on the Panthers’ roster, but there’s nothing small about their impact. Volk, a sophomore 106-pounder, improved to 43-1 after two victories Friday while Hanson, a freshman 113-pounder, was 42-4 after his Day 1 wins.

Both parlayed stellar summers and a wrestling room bond into big high school seasons. Volk won both the freestyle and the Greco-Roman U-16 titles at the USA Wrestling Nationals in Fargo, N.D., in July. Hanson won three championships — freestyle, folkstyle and Greco-Roman — in the U-14 age group at the USA Kids Nationals.

Putting them together in the Lakeville North wrestling room has only hastened their development.

“It’s great to have a good practice partner like Zach,” Volk said. “We just push each other and make each other better.”

Hanson said Volk tends to have the edge when they hit the mat. “He’s better than me in the practice room,” Hanson said. “Every day, I’m just trying to get better and score points on him.”

Value in getting there

Both lost their first-round matches — Kastner was pinned at 220 pounds, Ohm lost a 3-1 decision — but for each, simply being there a big deal.

“It was kind of surreal,” Kastner said. “I wasn’t even sure I would wrestle varsity this season. I was kind of going between varsity and junior varsity.”

Ohm lost nearly 80 pounds between his sophomore season and this year in hopes of reaching the state meet. The loss did nothing to lessen his achievement.

“I did what I set out to do,” said Ohm. “It’s been my goal since seventh grade. It means everything to get my name up on the wall in the wrestling room.”

Kastner, who missed his junior year with a knee injury, summed it up simply: “It’s the best thing that’s happened to me in sports in my life.”

Hopkins junior RJ Chakolis is making his fourth state tournament appearance, this year at 195 pounds. His past has been spotty, having never before finished sixth or higher.

After his winning his quarterfinals match, 3-2 in overtime over Wayzata’s MacAron Kukowski, his chance to end that streak is better than ever before. “I want to reach the podium. I’ve never gotten there before,” he said. “And not just the podium. I want to win this.”

His father, Happy, was a state tournament wrestler at Minneapolis North in the early 1990s. Happy is hard to miss, shouting instructions and encouragement to his son. RJ often looks to his father during a match, acknowledging him with a quick nod.

“He’s been my coach since I was young,” Chakolis said. “Sometimes my coaches get mad, but it’s hard not to listen to your dad.”