Danny Striggow and Bennett Tabor know the stakes and what to expect Saturday. 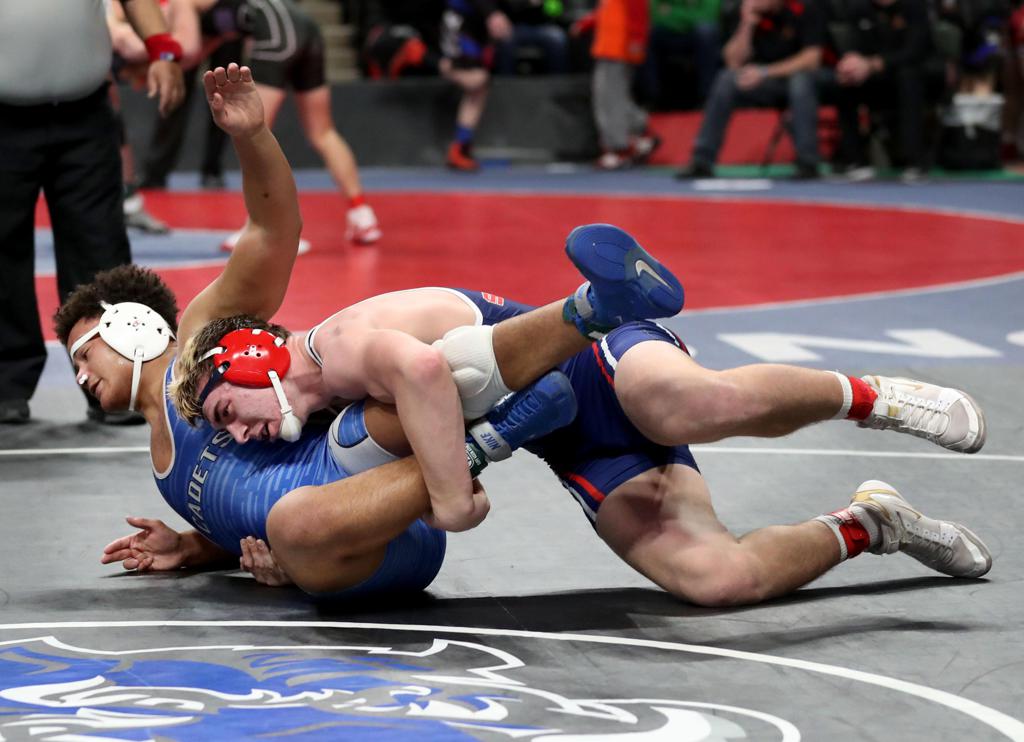 Two undefeated 220-pound wrestlers appear to be on a collision course for a championship match showdown Saturday. Defending champion Danny Striggow (17-0) of Orono and Simley’s Bennett Tabor (48-0) each made quick work of opening-round opponents on Friday.

Although each wrestler has a semifinal match before they could meet, Tabor is already envisioning what Saturday could be.

“From the beginning of the season I’ve wanted to go undefeated and win a state championship,” he said, adding he’s been prepping for Striggow for a while. “I’ve been watching film and keeping an eye out for what he’s done [all season].”

The sample size for Striggow is small; a dislocated elbow sidelined him for most of the season. But Striggow, who has committed to Minnesota to play football, isn’t worried about his conditioning.

“I’m back and ready to go, ready to finish it out,” he said.

Going for the first

Mahtomedi senior Bryce FitzPatrick (39-1) is poised to do something neither of his wrestling brothers did: win an individual state championship. FitzPatrick, the youngest of three, grew up learning and drilling with his older brothers Devin and Jake, both of whom wrestled in the state tournament and now wrestle for St. Cloud State.

“If it weren’t for them, I wouldn’t be where I am right now,” said Bryce, who will join his brothers at St. Cloud State next year.

After finishing fourth last year at 138 pounds, FitzPatrick moved up to 160 and has yet to lose at the weight. His lone loss this season came at 170.

On Saturday, FitzPatrick will try to best Devin, who made it to two finals.

“It’d be nice to get one title in the family,” he said.

Princeton brothers Zach and Tyler Wells each went into the quarterfinals undefeated. Tyler, a freshman 106-pounder, improved to 45-0 with his second technical fall of the day, a 21-6 rout of Jonah Hamburger of Watertown-Mayer/Mayer Lutheran.

Last summer Tyler won the UWW U15 World Championship at 41 kg in Budapest, Hungary. It boosted his profile significantly and resulted in multiple wrestling offers, including one to train at the U.S. Olympic Center in Colorado Springs.

“I like the coaches and I like my partners a lot, too,” he said. “And there’s my brother, too.”

All year, Will Magaard has had just one thought: Atone for a fluke that cost him a chance at state championship last year.

The Kerkhoven-Murdock-Sunburg senior, the 2018 106-pound champion, lost a match in the Section 5 semifinals in 2019 when he blacked out while in a headlock.

“It definitely motivated me,” he said. “It’s good to get back down here to show everybody the work I’ve put in.

Standing in Magaard’s path to another title was quarterfinals opponent Brett Willaby of Windom/Mountain Lake. Willaby was the state champion at 126 pounds in 2019, setting up one of the premier matches on Friday.

Magaard used a takedown, with two added back points, as the match ended to rally to beat Willaby 11-8 and get one step closer to returning to the top of the podium.

His coach, Wes Haglund, said Magaard “was so devoted, this whole year was put in to make up for what happened last year. You can’t outwork him. … He’s getting his revenge on everybody he wrestles.”

After his second pin of the day, Orlando moved within two matches of his third consecutive state title and improved his record to 48-0. But he doesn’t wrestle outside of the high school season. In fact, he’s giving up wrestling after the meet to focus on football. He’s signed to play defensive line at the University of North Dakota.

“I’ve been wrestling since before preschool,” Orlando said. “Since I was 3 years old. But I like football better. I like to hit people.”