He is the 27th wrestler to accomplish the feat. It also closed out his 112th consecutive victory. Plus notes about lots of wrestlers from Saturday's individual championships. 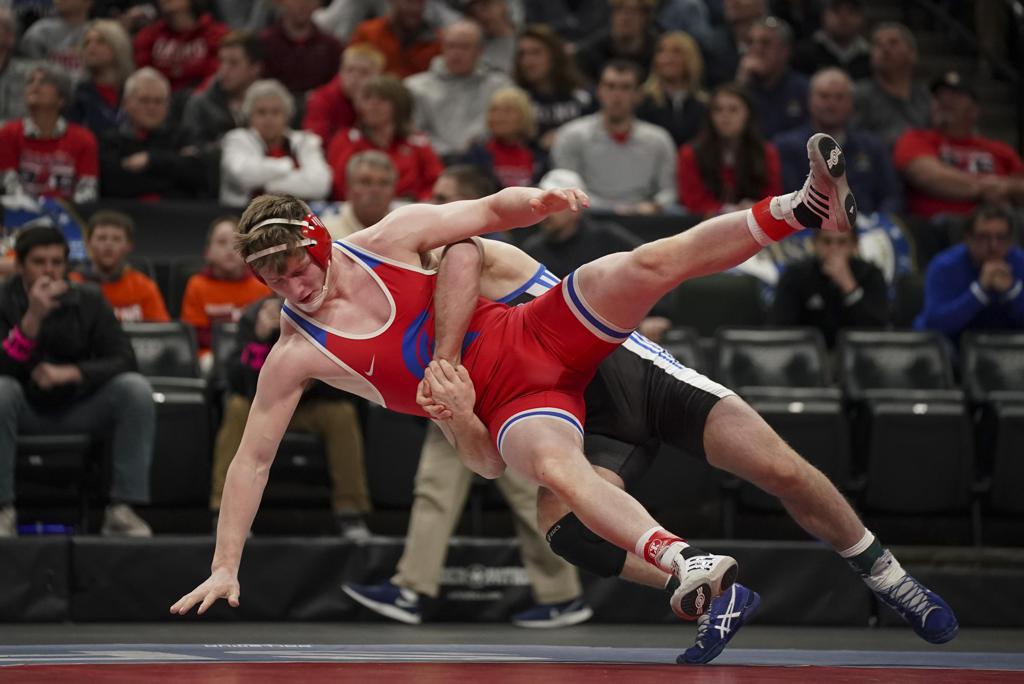 Kasson-Mantorville senior Patrick Kennedy said he remembers his losses much clearer than any of his wins. He’s going to have to reach deep in his memory to find the last one.

On Saturday Kennedy defeated Simley’s Quayin Short 5-2 in the Class 2A 182-pound title match to win his fourth state title. He is the 27th wrestler to accomplish the feat. It also closed out his 112th consecutive victory.

“It means a lot,” Kennedy said. “Finishing my career on top. I worked so hard and showed everyone anything is possible.”

Kennedy’s last loss came his freshman year against Owatonna’s Brandon Moen. Kennedy remembers everything about it.

“We had the dual locked up. I was looking forward to it all week,” he said. “Coach asked if I wanted him and said ‘yeah.’ I went out there and threw everything I had at him and he just beat me.”

Pickell back on top

Every time Charlie Pickell enters his Mankato home, he is reminded of what could have been. A state runner-up in 2018 and ’19, Pickell has his second-place medals hanging on his front door and his bedroom door. They serve as motivation.

“Those haunt me every day. It eats at me,” said Pickell, a Mankato West senior who won state titles as an eighth-grader and a freshman.

He avenged those losses Saturday, topping Mitchel Petersen of Byron 7-3 for the 132-pound title, his third career state title.

“It is time to take those medals down from the door and put my first-place one up there,” he said. “I’m sick of those.” 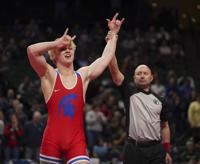 All year long, Bennett Tabor’s mind has been on one thing: Defeat Danny Striggow.

Tabor, a junior 220-pounder from Simley, knew if he wanted to reach his goal of becoming an undefeated state champion, the defending champ from Orono would be waiting. He was right.

Tabor made the most of his chance, defeating the previously unbeaten Striggow 8-1 behind an early takedown and near fall in the first period to clinch his first state title.

From air cast to 'I did it'

As Payton Anderson sat on the mat looking up at the scoreboard, all he could say was “I did it.”

The senior 152-pounder from Fairmont/Martin County West looked on in astonishment after he defeated Dassel-Cokato/Litchfield’s Jude Link for a state championship. It wasn’t that he didn’t think he could win. Just not this year.

Anderson tore his left ACL and MCL during football season this year. After four doctors turned him away, a fifth finally agreed to let him wrestle and finish out the football season.

Wrestling all season in an air cast, Anderson was surprised he made it this far. Then in his semifinal victory, he blew out his other ACL. He’s already got surgery scheduled for Tuesday.

“This is the feeling I’ve been waiting for my entire life,” he said. “You work hard with what you got and good things happen. I did it.”

Where does this one rank among them?

“This one’s got to be one of the greatest because this was my last one,” he said. “That was my last match I’m going to wrestle in high school and that’s just a special moment. I’m going to miss this.”

Sokol recently de-committed from Iowa, opting for Cornell of the Ivy League instead. “I didn’t know If that was going to be the place for me, nothing against Iowa,” he said. “I loved Cornell and everything about them … the [academics] helped too.”

First in the family

More importantly for FitzPatrick, it's the first state title in the family. His older brothers and current St. Cloud State wrestlers, Devin and Jake, both wrestled at the state tournament but never won a state title.

“I’m pretty sure everyone’s crying right now,” said Bryce, who’s goal was to win one for the family. “It feels awesome, I can’t even put it into words.”

Along with Kennedy and Tabor, three other 2A wrestlers finished undefeated seasons with a state championship: 106-pound Tyler Wells of Princeton, 113-pound Christian Noble of Big Lake and heavyweight Kaleb Haase of Redwood Valley.

Brothers Mason and Landon Gode of Long Prairie-Grey Eagle/Browerville were No. 1 seeds in adjacent weight classes in Class 1A. Landon, a sophomore, brought a 50-3 record into his 132-pound championship match at Charley Elwood of Medford. Mason, a junior, was 53-1 before meeting Kerkhoven-Murdock-Sunburg’s Will Magaard in the finals at 138.

The finals brought mixed results for the brothers. Landon lost 3-2 to Medford’s Charley Elwood on a late takedown. Elwood won the title at 113 a year ago.

After watching Landon’s match, Mason defeated Will Magaard of Kerkhoven-Murdock-Sunburg 10-6.

“I felt so bad for him,” Mason said of his brother. “I know he’s worked hard for this. But I knew I had to put it off to the side and worry about myself first.”

Mason’s victory was his third of the season over Magaard.

“That’s hard, especially against really good wrestler,’’ he said. I knew I just had to push myself and find another gear.”

Sibley East sophomore Drayden Morton spent the season’s first half recovering from a torn meniscus in his right knee, the second half getting back to the top of the podium.

Morton, who won at 106 in 2019, followed it up with a 3-0 victory over Brandon Ross of Caledonia/Houston in the 120 finals. Morton said wrestling with teammate Derek Steele, who had won the 113-pound crown, was key.

“Having someone like that to go against helps,” Morton said. “And Lincoln Carpenter, too. He placed at 138.”

• The meet stopped for roughly 20 minutes near the end of the morning session when Becker 220-pound junior Brayden Weber collapsed after his semifinal match, which he lost. Medical personnel arrived quickly and chest compressions were administered, and Weber raised a thumb twice as he was taken off on a stretcher.