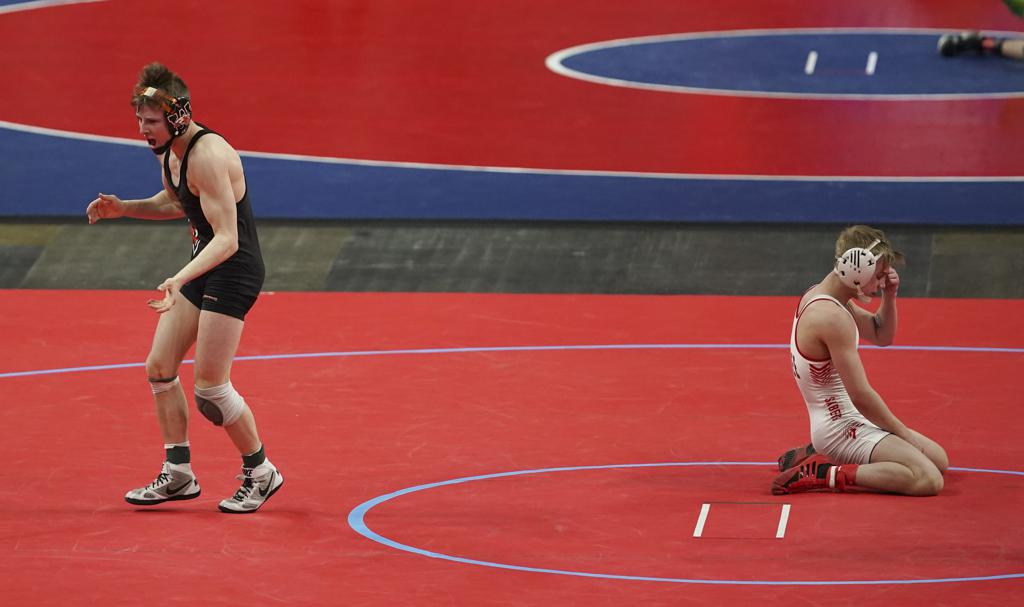 Ryan Henningson of Winona-Winona Cotter, in the dark singlet, reacted after defeating Paxton Creese of Shakopee 6-4 in their Class 3A 120-pound match. Photo: JEFF WHEELER * Jeff.Wheeler@startribune.com

There were two things Paxton Creese hadn’t done in the past two seasons heading into the state tournament: Lose to a wrestler from Minnesota. And slow down.

The 120-pound senior from Shakopee is a Tasmanian devil on the mat, a 5-foot-5 power supply that never stops. He prefers wrestling on his feet, where his boundless intensity often leads to lopsided results thanks to his penchant for putting up points.

“People refer to me as the ‘Takedown Machine’ because I’m always on my feet, cutting people, taking them down, scoring points,” Creese said.

Creese’s frenetic style — some would say frenzied — paid off in a huge way. He was 53-1 in 2019 en route to the Class 3A 113-pound championship. This year, he was 48-1 heading into his 120-pound championship match Saturday against Ryan Henningson of Winona/Winona Cotter.

Both of his losses came against an out-of-state wrestler while competing in the Clash Duals in Rochester. He defeated Henningson in the 113-pound final last year. On Saturday, however, it was Henningson who came out the winner in a 6-4 decision.

It’s not just on the mat that Creese stands out. His buoyant nature has been a source of energy for Shakopee on its path to back-to-back Class 3A team championships. In the Sabers’ wrestling room, the incandescent Creese provides all the light needed.

“Ever since I was a kid, everyone always referred to me a social butterfly,” he said. “I love to talking to people, always got something going on.”

While Creese has had plenty to get fired up about at the high school level, his wrestling passion lies with Greco-Roman style, which he doesn’t get to indulge during the season. The style forbids any holds below the waist, forcing wrestlers to concentrate on upper-body holds and throws.

With Creese’s strength being wrestling on his feet, it makes sense that he and Greco-Roman wrestling are a perfect fit.

“I love Greco-Roman,” he said. “When I was little, my dad taught me a couple of Greco moves from his judo background and ever since then, I just grew into it.”

It’s why Creese’s M.O. tends to be more about building up big leads rather that pins, though two notable pins have punctuated Creese’s 2020 state tournament.

He stuck Stillwater’s Matt Hogue in little more than a minute in the team championship match, an adrenaline shot in the Sabers’ communal arm.

“That was one of the craziest moments of my career, just for the excitement it brought,” Creese said.

“We’d already started out the match with two good wins, but that was just nuts. The whole bench was going crazy.”

He made quick work of St. Michael-Albertville’s Jed Wester in Saturday’s 120-pound semifinals, getting a pin at 1:22 of the first period, setting up his shot at a second state title that fell just short.