The Stillwater senior, whose brawling style has brought 158 victories and injuries along the way, is seeking to become the seventh Minnesota wrestler to win five individual state titles. 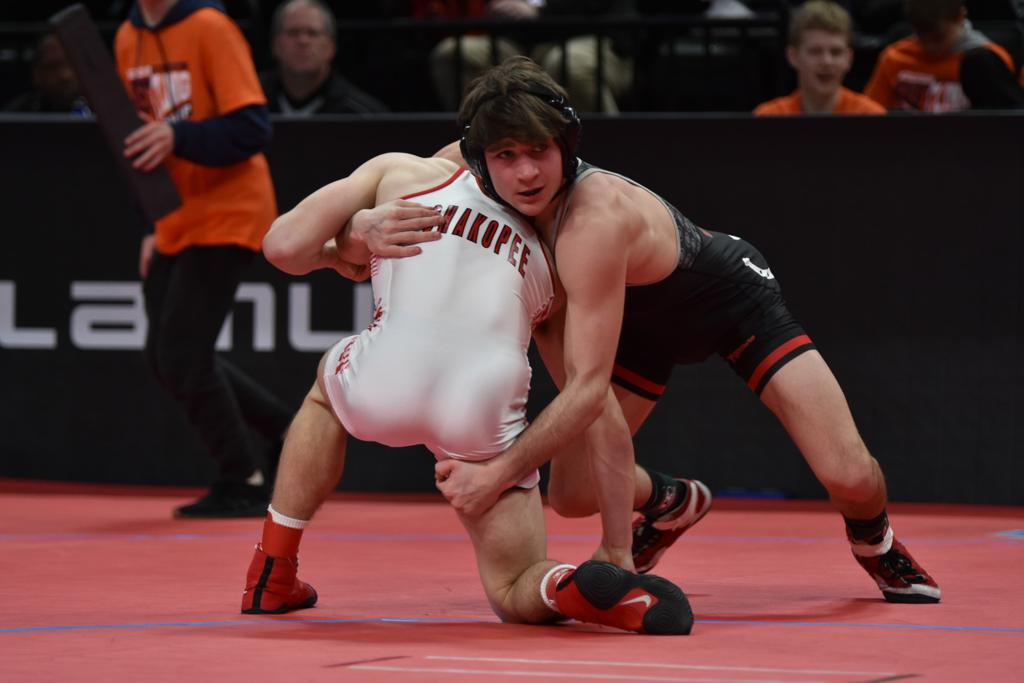 Reid Ballantyne (in black) of Stillwater, competing in the 2020 state tournament. Photo by Matt Onken

When he was about 10 years old, an age when many wrestlers are just getting started and finding their way around a mat, Reid Ballantyne had had enough.

Ballantyne had the experienced normal youth wrestling ups and downs — some promising victories mixed with a few emotionally crushing losses. The latter, Ballantyne thought, were just too much to endure.

So he made up his mind that he would never again be willing to allow an opponent an advantage. Losing never sat well. Giving up so much as a single point was a personal insult.

“It was never the wins that drove him, it was always the losses,” said the Stillwater senior’s father, Steve. “They were getting tougher for him to deal with every year. That’s when he became bulletproof.”

Said Ballantyne, simply, “To me, every point counts. I hate getting scored on.”

With his final season at Stillwater set to begin as winter sports competitions resume this week, the 132-pound Ballantyne is chasing a milestone that few have reached in Minnesota prep wrestling.

With a brawling style, a never-back-down attitude and an unrivaled ability to compartmentalize pain, he’s seeking to become just the seventh wrestler in state history to win five individual state championships.

He’s won despite ankle, elbow and shoulder traumas that would have ended the season for most wrestlers. He suffered a torn meniscus — one in each knee — in each of the past two season. A back injury continues to plague him, leaving him to manage consistent pain on and off the mat.

He’s missed portions of each of the last two seasons due to injury. But he always came back.

“He’ll pop something, them come off the mat and tell us his season is over,” Hartung said. “But them his body gets time to settle down and through training and a lot of Advil, he’s always able to come back. A majority of kids couldn’t do that.”

And come back strong. Last year, Ballantyne won his fourth state title despite an undiagnosed meniscus tear that required surgery after the season. “I knew about it, but no one else did,” he said.

The reason for Ballantyne’s injury record can be traced directly to his style. He doesn’t waste time or energy on trying to be a perfectionist. He prefers, instead, to physically overwhelm his foes. Ballantyne wants opponents to walk away after each match knowing they’ve been in a donnybrook.

“He’s an extremely tough kid, one of the toughest kids I’ve ever been around,” Hartung said.

Hartung, a three-time All-American and two-time NCAA champion at 197 pounds with the Gophers in the late 1990s, also was known for physically dominating his opponents.

“Reid just says ‘I’m going out there and I’m going to whoop that kid’s rear end.’ You’ll have a hard time finding anybody who will outwork him.”

Ballantyne has a few pet moves including one so feared that opponents are often caught off guard while obsessing over it.

“There’s a few names for it: We call it the Viper, others call it the Concrete Mixer,“ Ballantyne said. “It starts from the head, then I go to an under-hook, get the wrist and I end up putting you on your back. It’s kind of catch-22 for kids, because they look so hard for it and get scared of it, and then I just go around them.”

Ballantyne’s style is popular with fellow wrestlers, who often gather to watch his matches, but his approach comes with a price.

Ballantyne acknowledged that his relentless approach has cost him a future as a college wrestler. He’s decided to end his time on the mat when this season is over.

He told his father of his plans to stop wrestling after high school just before last season.

“It was pretty hard on my dad. He always had a dream of me being an NCAA champion,” Ballantyne said. “It was pretty emotional for awhile, but he got over it.”

“It took me by surprise,” said Steve Ballantyne, who wrestled and played football at Southwest Minnesota State. “I tried to talk him out of it, tried to reason with him, but he really knows who he is. He knows his body and he didn’t want to waste four years of his life.”

Last summer Reid started a lawn care service. He’s already got about three dozen clients and nearly that many signed up for winter snowplowing. The business has been so successful he’s already looking into getting a third truck. He’s planning on expanding in the spring and dreams of one day merging his organization with his father's concrete company.

“He seems ready to get on with his life,” Steve Ballantyne said.

But first, there’s the matter of one more individual state title and the hope of leading the Ponies, ranked No. 1 in Class 3A, to their first state team championship.

“I still want to win [my fifth] championship really bad,” he said.

Added Steve Ballantyne, “It’s not important to me as far as the number of state championships. I just want to see him go out a winner.”

Also on the MN Wrestling Hub: Marcus LeVesseur takes over the Sabers’ defending championship team, plus other news and notes about the upcoming season. Click here.