The Sabers sought to keep St. Michael-Albertville from gaining bonus points while falling behind early before rallying to win their last four matches. 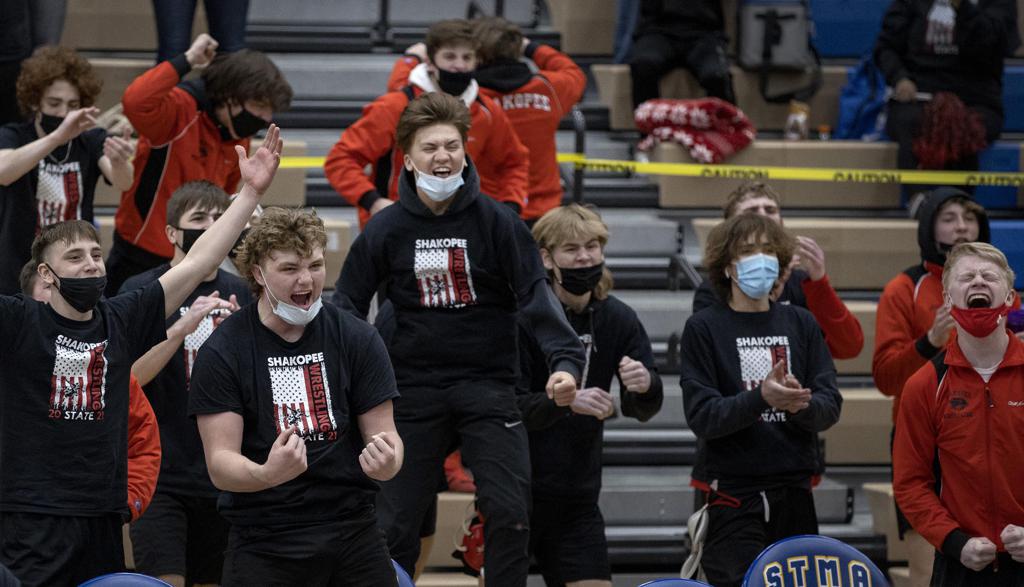 Shakopee wrestlers reacted after winning the Class 3A team championship, a moment that teams have not been able to celebrate in-person in a state tournament venue since last March. Photo: Carlos Gonzalez * carlos.gonzalez@startribune.com

At first, it was all about cutting their losses. In the end, it was about complete domination.

Leaning on its top-heavy lineup, Shakopee rallied with victories in the final seven matches to storm past St. Michael-Albertville 30-24 and win its third consecutive Class 3A team wrestling state championship.

The Sabers were the No. 1 seed in the meet by virtue of their 24-0 record heading into the tournament Thursday at St. Michael-Albertville High School.

They survived a strong challenge from Anoka in the semifinals, coming back to win 34-25 after falling behind 25-16 with four matches to so. The Sabers trailed again in the finals, 24-3, after St. Michael-Albertville 145-pounder Jed Wester pinned Shakopee’s John Kroll.

A loss, sure, but it was the way Shakopee lost that mattered.

Until Kroll was pinned, Shakopee was keeping the score close by not allowing the Knights to rack up bonus points. The Sabers lost six of the first seven matches of the finals, getting only a tight 3-1 victory from No. 1-ranked Blake West at 113 pounds. But in doing so, they kept St. Michael-Albertville from running away with the match until they could get to the strength of their lineup.

“Every team tries to save points. Every point matters.” Sabres coach Marcus LeVesseur said. “Our motto today was to wrestle all six minutes hard. They did just that. It may not have been pretty, but they go the job done.”

All season, the Sabers have been dominant at 182 pounds and above, led by the Johnson brothers — Joey, a once-defeated 195-pounder, and Tommy, an undefeated 220 pounder. Opponents have tried, and failed, all season to build a big enough advantage to withstand Shakopee once the Sabers reach that point in their lineup.

The Johnsons were on-point in the finals. After Jaden Hellerud eked out a 5-3 victory at 182 pounds with a reversal with nine seconds left in the match, Joey Johnson followed with a pin of St. Michael-Albertville’s Marcus Mueller, the hero of the Knights’ semifinal victory over Stillwater. Tommy Johnson then matched his brother with a pin of St. Michael-Albertville’s Ethan Yantes.

In a span of two matches, the Sabers had turned a 24-15 deficit into a 27-24 lead. They capped it off with a rugged 2-0 victory by Jade Trelstad at heavyweight.

“There is a lot of stress in wrestling, let alone being back-to-back state champs, let alone being on the verge of a three-peat,” LeVesseur said. “I’m just so happy for the kids, that they were able to endure the pressure.

"We’ve said we have the best 14-wrestler team in the state. As long as this group gives it their all, when the dust settles, we’ll win every time.”

Click here for Class 3A individual meet notes and notes.