Also among the angles for the season just beginning: a new girls’ state tournament and an old boys’ tournament revived. 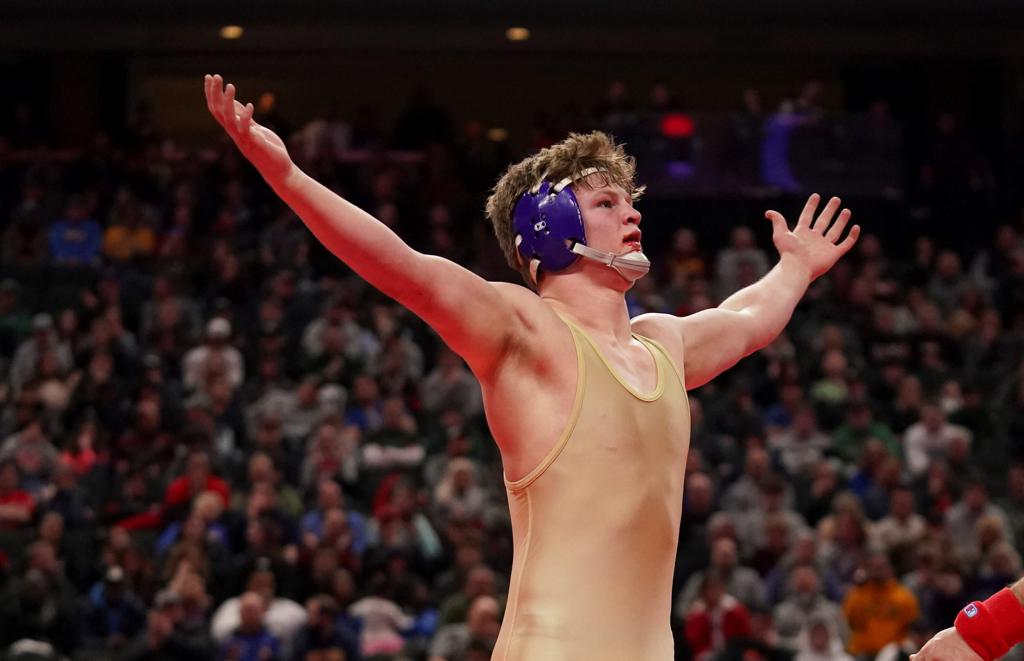 Waconia's Max McEnelly is a back-to-back state champ with only one prep loss on his record. JEFF WHEELER, Star Tribune

Pound for pound, who’s the best?

The strong wrestling culture in Minnesota means there’s always the question of which wrestler is considered the best on a pound-for-pound basis. A few names come to the forefront this season.

Kasson-Mantorville senior 182-pounder Bennett Berge has a chance to become just the seventh wrestler in state tournament history to win five state championships. He’s four Class 2A titles in, at 138, 160, 170 and 182 pounds. Lakeville North senior Jore Volk is a back-to-back state champ and is ranked No. 1 in Class 3A at 132 pounds. Stillwater senior 170-pounder Hunter Lyden and Simley 220-pound junior Gavin Nelson, both coming off undefeated state championship seasons, deserve to be mentioned in the same breath.

But Waconia junior Max McEnelly stands out most. A University of Minnesota commit, McEnelly has not lost a meaningful match in more than a year. He has won two straight Class 3A tournaments, at 170 and 182, is 91-1 over the past two prep seasons and won the 195-pound title in the 16U division at the USA Nationals in Fargo last summer. He’s a pretty fair football player, too, a second-team All-Metro selection in 2021.

In 2019-20, Simley swept through an 22-0 season, winning such high-profile meets as the Cliff Keen Invite, the Cheesehead Invite in Wisconsin and the Minnesota Christmas Tournament en route to the Class 2A team title.

Last year, when the COVID-19 pandemic complicated matters, the Spartans proved to be the best team in the state — and perhaps the nation — with another perfect season and six individual state champions.

Simley suffered a few high-end losses — four of its six state champs graduated — but don’t expect the Spartans to vacate their top spot in Class 2A and statewide.

In addition to their returning champs in Nelson and senior 138-pounder Chase DeBlaere, the Spartans have five other state tournament place-winners coming back (Brandon Morvari, Peyton Spychalla, Kaiden Schrandt, Cash Raymond and Travis Smith) and two others set to make waves in 170-pounder Landan DuVal and 195-pounder Soren Herzog.

Girls step into the spotlight

Last spring, the Minnesota State High School League’s Board of Directors voted overwhelmingly to sanction the first girls’ wrestling state tournament, and the inaugural individual state meet will be this winter, running concurrently with the boys’ meet.

Under a plan by the Minnesota Wrestling Coaches Association, girls’ wrestlers will continue to compete, as they have in the past, as part of their school’s boys’ team during the regular season but will have the opportunity to wrestle in the girls’ individual tournament once the postseason begins. Girls will not be allowed to wrestle in the postseason in both state meets. There is no girls’ team tournament.

Fourteen weight classes are expected to be available for the girls’ tournament, with a maximum of eight wrestlers per weight, half as many as in the boys’ individual bracket. Those numbers could be increased as the tournament grows in popularity.

The coaches association estimates there were roughly 250 girls’ high school wrestlers in 2019, fewer last year because of pandemic concerns.

The Christmas Tournament is back

After a year away because of the pandemic, the Minnesota Christmas Tournament, the state’s premier early-season tournament, is back.

Thirty-six teams, including such top outfits as Simley, St. Michael-Albertville, Shakopee and Waconia, will compete in an invitational format.

As usual, it will be held over two days, Dec. 17-18, at the University Center Rochester.