Expectations, endured and then embraced, weigh no longer on wrestler Eli Paulson

The Anoka junior, son of Olympic medalist Brandon Paulson and grandson of Hall of Fame coach Doug Paulson, overcame youthful disinterest to make a name for himself. 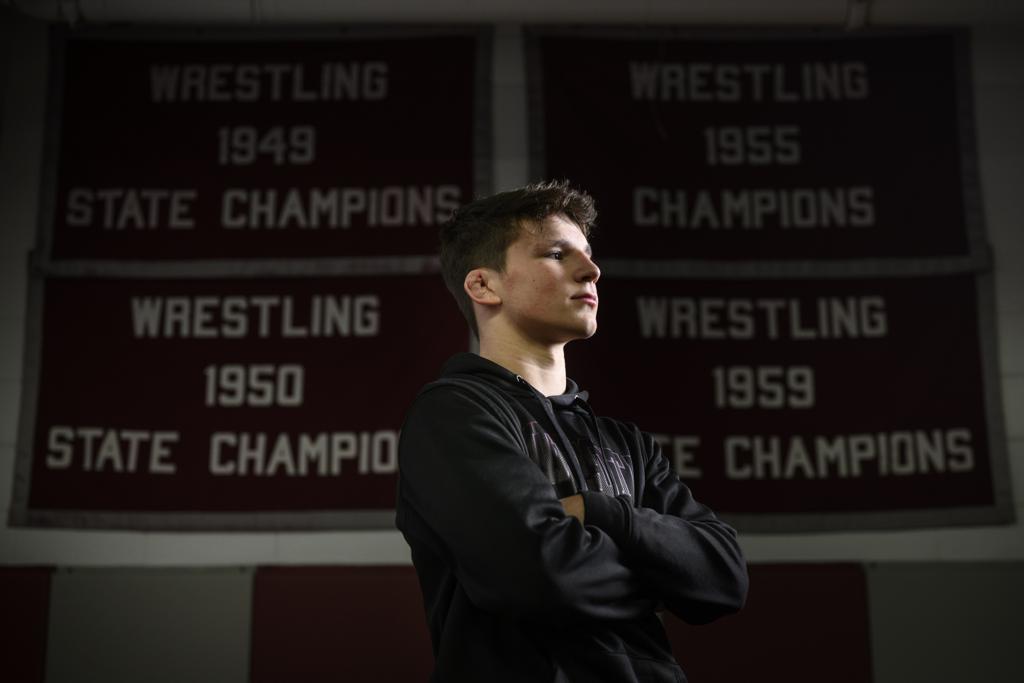 Being the only son of an icon comes with baggage. Anoka junior wrestler Eli Paulson knows. He’s spent a lifetime carrying that baggage.

His father, Brandon, is a Minnesota wrestling legend: a three-time high school state champion for Anoka, NCAA All-America, Olympic silver medalist, co-owner of one of the premier wrestling clubs in the metro and coach of a top club team. The name Brandon Paulson carries cache in regional and national wrestling circles.

Eli doesn’t see it that way, not anymore. There’s no reason to deny his lineage. He takes the other approach. He’s proud of it.

There was a time early in Eli Paulson’s wrestling life when being Brandon’s boy was more than he wished it to be. Eli was barely 9 years old, but many expected to see blossoming greatness.

“Every time he’d take the mat, 20 or 30 people would stop to watch because he’s Brandon’s son,” said Doug Paulson, Eli’s grandfather. Papa Doug, as he’s known, is a renowned wrestling coach in his own right, a member of the Minnesota Wrestling Hall of Fame from his time at Anoka and Hamline and leading club programs. “The pressure was just more than he wanted. He took about a year off from wrestling.”

“Wrestling wasn’t my thing,” Eli said. “I kind of did it because my dad was good at it, but I was just going through the motions.”

“I never pushed wrestling on him as much as I would have on some of my other wrestlers,” Brandon said. “As a kid, I’m sure he felt the expectations, and that’s tough on a kid.”

Eli developed a taste for other sports. Football, in particular. He’s loved running pass routes since he was 4. His combination of speed and slipperiness as a slot receiver made him one of a number of dangerous targets for the Tornadoes last fall. He caught 44 passes for 442 yards and a pair of touchdowns in a season of renaissance for Anoka.

But even as he tried on other sports for size, wrestling was never far away. Brandon convinced Eli to practice once a week, “for things that wrestling teaches, toughness and discipline. And giving him a little taste of it.”

When he was 11, Eli accompanied his father to a tournament and got some time on the mat. He remembers vividly when wrestling’s lightning bolt struck and jolted him into a love for the sport he hadn’t felt before.

Brandon admitted he didn’t expect the turnaround so quickly and completely. “Sometimes, it’s hard for a kid to come back to wrestling,” he said. “That’s why it was important to give him that little taste of it. I don’t know if that helped him make up his mind, but he started having fun.”

Always armed with a smile and a positive attitude (“That’s his mother’s influence,” Brandon said, laughing), Eli has become one of the state’s best high school wrestlers. He’s 30-2 and ranked No. 3 at 132 pounds in Class 3A, behind two of the state’s elite, Jore Volk of Lakeville North and Caleb Thoennes of St. Michael-Albertville. Both are seniors, meaning that a state championship is a very real possibility for Eli before he graduates.

Anoka wrestling coach Todd Springer said Eli’s mental approach is perhaps his strongest attribute. Springer admits to being impressed by how Eli handles attention directed his way because of his famous father.

“He’s constantly reminded of it wherever we go. We were just at a national tournament in Rochester, The Clash, and they announced his story, being the son of an Olympic silver medalist,” Springer said. “He handles it so well. He’s just got a great relationship with his father.”

His goal now is to follow in Dad’s footsteps, become an elite Greco-Roman wrestler and make an Olympic team someday.

Undoubtedly, a difficult road. But with two generations of wrestling distinction in his corner in Papa Doug and father Brandon, it’s not quite the long shot it seems.

“He’s got a confidence in himself that I didn’t have when I was his age,” Brandon said. “He’s comfortable in who he is. Now, it just depends on what he ends up wanting to do.”