A two-time state champ going for three, Max McEnelly keeps it simple: ‘I love to dominate’

The Waconia junior heads into the state meet having not lost a match in more than two years. 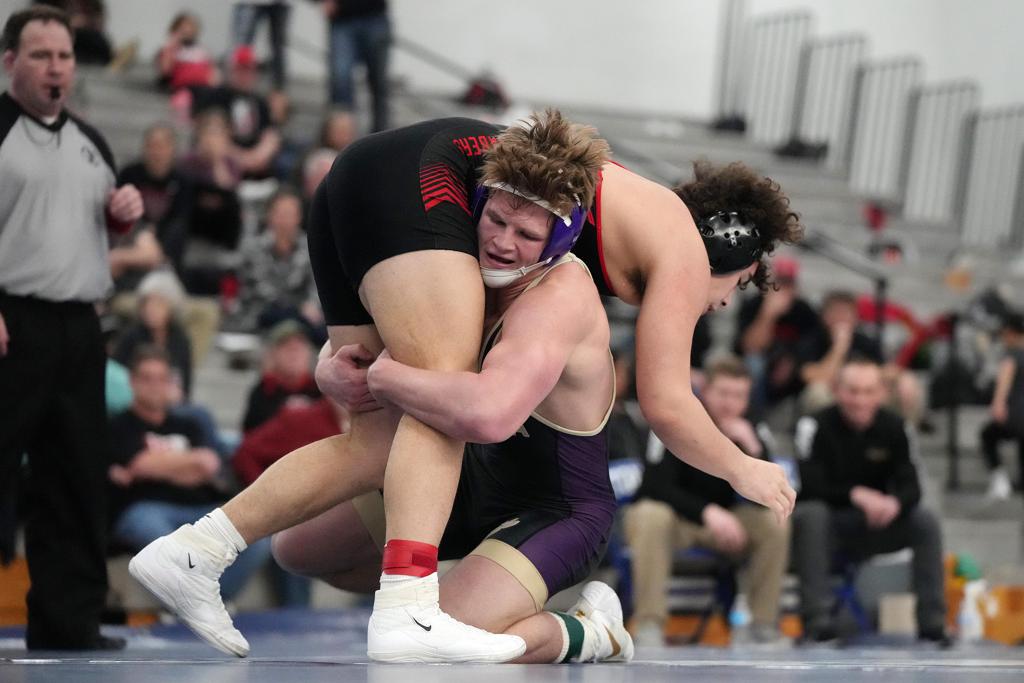 Max McEnelly still wasn’t quite sure what he was getting into when he ventured to Fargo last summer.

The idea of wrestling on the national stage appealed to McEnelly, who had completed an undefeated high school season for Waconia as a sophomore en route to his second consecutive state championship.

He was good, no doubt. But he was about to compete in the USA 16U Nationals in North Dakota in July, a high level of competition with a style of wrestling, freestyle, that he hadn’t tried much to that point. “I’d only been wrestling freestyle for two or three months,” McEnelly said.

He swept through the 195-pound weight class, beating highly regarded Pennsylvanian Sonny Sasso 11-8 in the finals.

Perhaps the result surprised McEnelly himself. Elsewhere in the wrestling community, it only reinforced what had been said for the better part of a year.

Pound for pound, Max McEnelly is the best wrestler in Minnesota.

Next for McEnelly: the high school wrestling state tournament and his pursuit of a third consecutive individual state championship. Team competition begins Thursday, and the push for individual titles begins Friday and concludes Saturday.

The evolution of a wrestler

McEnelly came away from that Fargo tournament willing to accept what humility had stopped him from acknowledging. “That’s when I knew that I was pretty good,” he said.

“That was a huge deal for him,” said Waconia assistant coach Derek Sikora, who is also McEnelly’s training partner and mentor. “He wasn’t 100 percent sold on going there. He was kind of like, ‘Yeah, I’ll go and wrestle,’ but he didn’t know what to expect. In the meantime, he was still training for football.”

Football never went away; the physicality and team component resonate with McEnelly, who was a second-team All-Metro running back in the fall. But his success on the mat was getting too big to ignore. When the Gophers, his home state and dream school, came calling with a scholarship offer last fall, McEnelly was swayed. He swapped out his lifelong dream of playing college football for a Gophers wrestling singlet.

“When I took my visit there, the coaches and the guys on the team made it feel like home,” McEnelly said. “I wanted to stay in Minnesota so my family and people who’ve supported me can come and see me. It was a pretty easy decision.”

Eyes tend to turn toward McEnelly when he takes the mat. Blessed with the trinity of athletic gifts — power, speed and agility — augmented by a strong work ethic, he brings out the type of awe in wrestling fans that generally has been the domain of Minnesota’s greatest.

Names tossed out in comparison are those of legends. Mark Hall, Minnesota’s only six-time state champion. Gable Steveson, who needs no introduction.

“Sometimes in wrestling there are guys like that, who are so much better than everyone else,” said Shakopee’s Jadon Hellerud, who lost to McEnelly by technical fall (22-7) in the Class 3A, Section 6 195-pound final. “You know what the outcome is going to be, but you go out there and battle and do your best. Max is so fast and has such great anticipation. You know you’re going to lose, but there’s nothing you can do.”

The margin of McEnelly’s section victory is telling; Hellerud is ranked No. 2 at 195 in Class 3A. “Hellerud is a tough competitor. He’s athletic,” McEnelly said. “I’ll probably see him again in the state finals.”

It’s been two years since McEnelly lost a high school match, and he remembers it well. In his freshman year, he lost to Kasson-Mantorville’s Bennett Berge, whose family is wrestling royalty in Minnesota. “I couldn’t get to his legs,” McEnelly said. “It was a good learning experience.”

Since then, only victories. McEnelly, 80-0 over the past two high school seasons and 43-0 this season, said his goal is not to win but to overwhelm. Only two of his matches this season went the full six minutes; all others were won by pin or technical fall. Pins are always desired, but those tech falls suit McEnelly best, he said, because “I love to dominate.”

“A pin can come at any time,” he said. “Someone makes a mistake and you get stuck. When I wrestle, I like to score points. A tech fall, you just keep scoring points and there’s nothing they can do. You dominate them.”

Three days of wall-to-wall wrestling will begin Thursday and continue through Saturday at Xcel Energy Center. A look at the schedule:

Individual first round: All classes, 9 a.m.