Class 3A: St. Michael-Albertville returns to the top with authority 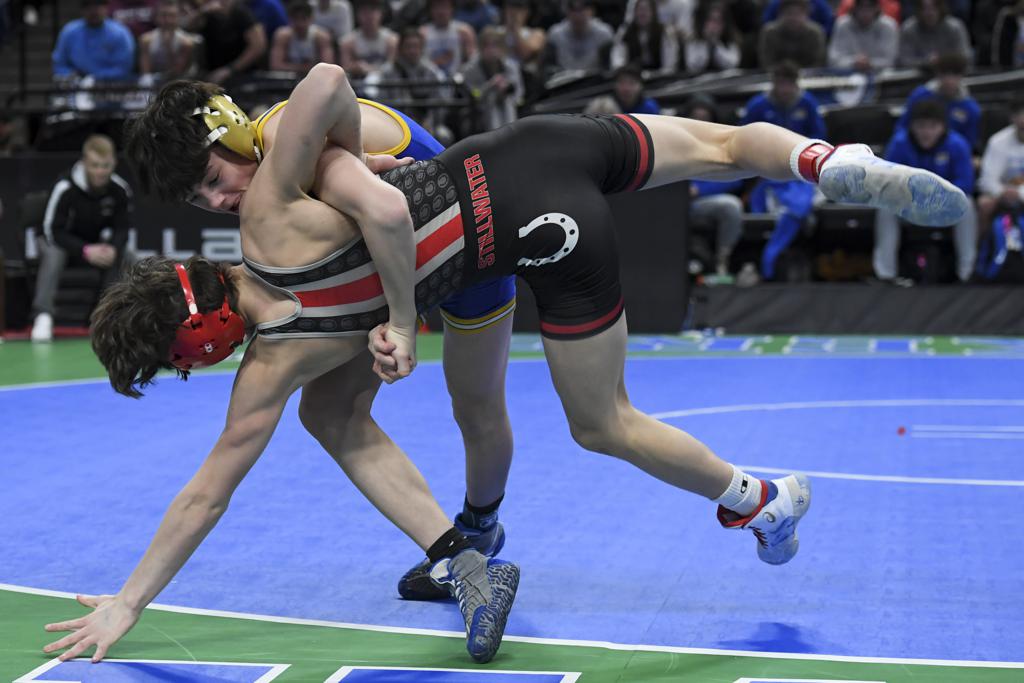 Top-seeded St. Michael-Albertville, which entered the championship match a perfect 23-0, raced to a big lead Thursday at Xcel Energy Center and cruised to a 39-27 victory over Stillwater to win the Class 3A wrestling state title, its first since 2018.

The Knights began their pursuit of perfection Thursday by taking down Apple Valley, a team with whom they share a significant history. Apple Valley had met St. Michael-Albertville in the Class 3A finals six times in the past 15 years, with the Eagles winning five and the other ending in a tie resulting in co-champions in 2013.

But Apple Valley hadn’t been in the tournament since 2017 as it retooled its program. St. Michael-Albertville quickly took control, jumping to a 39-3 lead en route to a 45-19 quarterfinals victory.

The Knights’ dominance at the lower weights showed through again in the semifinals against Anoka. Their first four wrestlers registered pins, and through five matches they had a 28-0 lead. St. Michael-Albertville finished with six pins overall in a 43-23 semifinals victory over the Tornadoes.

The thing that makes St. Michael-Albertville’s early excellence so devastating is that it demoralizes opponents. Falling behind big points creates pressure on foes, who see their chance slipping away as their margin for error gets slimmer.

“It helps everything,” St. Michael-Albertville coach Josh Joriman said. “It creates a little momentum. Our guys are competitive in everything, even dodge ball, so it’s cool to see them roll like that.”

Stillwater coach Tim Hartung’s attempts to create more favorable matchups early in the finals failed to pay off. He moved 113-pounder Dylan Dauffenbach and 120-pounder Sam Bethke, both of whom had won twice in the earlier rounds.

However, it made no difference in the finals. St. Michael-Albertville proved impervious to the strategy, creating a 39-0 lead for enough of a barrier against Stillwater’s strength at the upper weights.

“It’s nice,” said freshman 126-pounder Landon Robideau, whose 24-9 technical fall over Bethke was vital to the Knights’ process. “People can move guys around, they can try anything they want, but usually it’s the same outcome.”

Despite their undefeated record, Joriman, the championship coach, said his team never felt an ounce of pressure.

“Our guys worked so hard for everything,” he said. “It was just trusting the process and focusing on every match.”