Class 2A: Simley starts fast on the way to its fourth state championship in a row

The Spartans scored the first 32 points in their victory over Kasson-Mantorville. 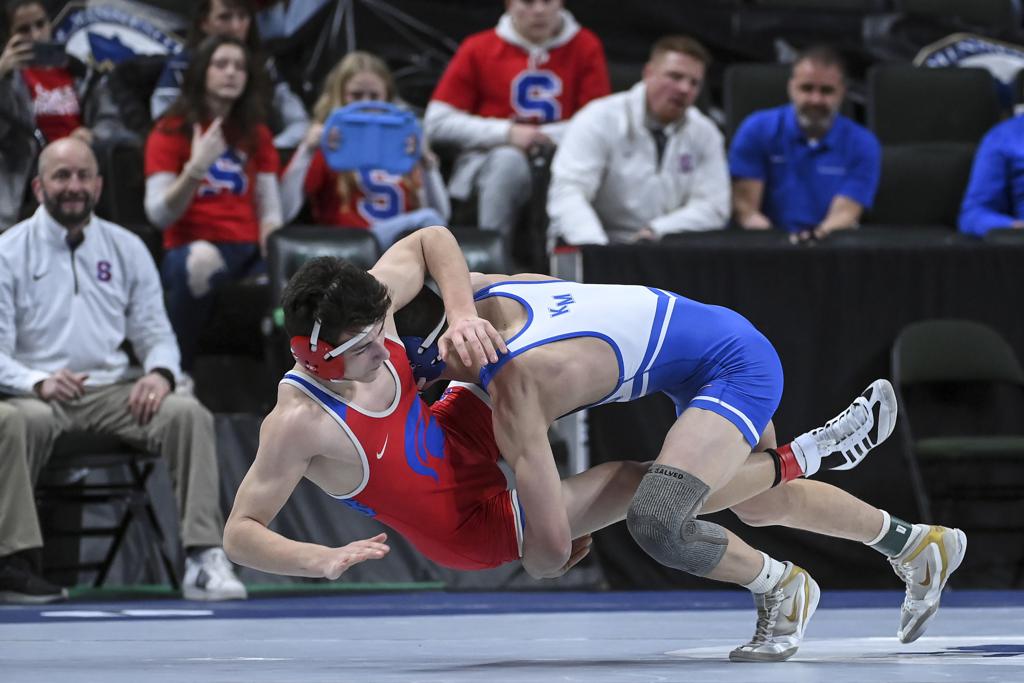 Like his Simley teammates, junior Soren Herzog repeated as a state high school wrestling team champion Thursday when the Spartans defeated Kasson-Mantorville 47-21 in the Class 2A final.

But unlike the rest of them, this year’s title came with a new team for Herzog, whose family moved from Colorado to the Twin Cities this year.

Herzog, who won a 2021 team title with Cheyenne Mountain High School, won his match in the 220-pound weight class by pin in Thursday’s final. The bout came in the final moments of the championship match, after Simley had already clinched the victory to ensure a fourth consecutive state title.

Herzog said this year’s state title was just as exciting as his one last year.

“We have all the fans behind us. We have all the wrestlers supporting us as well,” he said. “In the end, you’re all just family helping each other out.”

Austin Grzywinski recorded a pin at 106 pounds to start the match for the Spartans, followed by another by Brandon Morvari at 113. At 126, James Salas trailed by a point heading into the final period but won the match 8-4 after securing a pair of takedowns.

Chase DeBlaere, a senior who has signed with Oregon State and is ranked No. 1 at 132 pounds, secured a pin 81 seconds into his match to extend the Spartans’ lead to 24-0.

Kasson-Mantorville was making its first state tournament appearance since 2018. The KoMets and the Spartans had been in the same section the previous four years, but Simley was moved into a different section this year.

“We have a lot of respect for Kasson,” Simley coach Will Short said. “The score was a little different than maybe the dual was, but that was because those first seven weights with our little guys getting it done.”

Last year’s Simley team was arguably one of the best in state history. The Spartans, who had five Division I signees, won nine of their 14 matches by pin in a 68-6 state championship victory over Dassel-Cokato/Litchfield.

Despite losing some of their top wrestlers, the Spartans were the No. 1 team in Class 2A heading into 2021-22. At the end of the season, they were still ranked No. 1 and had wrestlers ranked in the top 10 in Class 2A in 10 weight classes.

Kasson-Mantorville finished the season ranked second in Class 2A and had seven wrestlers ranked in the top 10 of their respective weight classes.

“We didn’t do the things we needed to do to beat a team like Simley,” Kasson-Mantorville coach Jamie Heidt said.