The Huskies finished strong in the semifinals and started fast in the the championship match against Royalton/Upsala. 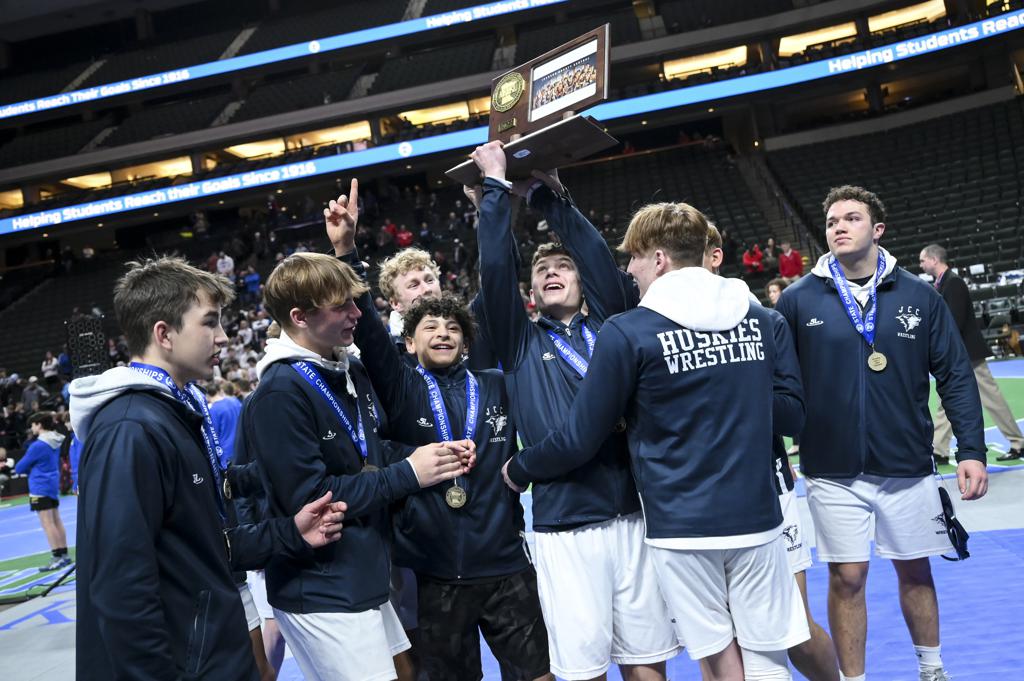 Jackson County Central wrestlers celebrated with their first-place trophy after they won the Class 1A title. Photo by AARON LAVINSKY, Star Tribune

The Jackson Country Central Huskies were determined not to have a repeat of the 2021 wrestling state meet. They didn’t, and it led to a 45-23 victory over Royalton/Upsala in the Class 1A championship match Thursday at Xcel Energy Center.

One year after a late meltdown in the semifinals doomed their chances at a state title, the top-seeded Huskies found themselves in a tight situation against West Central Area/Ashby/Brandon-Evansville in the semifinals.

Going into the 182-pound match, they led by just two points over a team they expected beat handily.

“We kind of got punched in the face, so to speak, in the semis,” Jackson County Central coach Nathan Hanson said.

Jackson County Central asserted itself at that point, getting pins from Caleb Vancura at 182, William Freking at 195 and Cameron Scholten at heavyweight over their final four bouts to emerge with a 41-27 victory.

“We were up against the ropes, and the guys battled back,” Hanson said. “It was the first time this year in a dual we’ve been in trouble like that, and we really responded. It was great to see.”

Hanson specifically cited Freking for stepping forward when the Huskies needed him.

“He was on his back a couple of times and he came back and got on top and got the pin,” Hanson said. “That match decides the dual. That was a huge win for us.”

The Huskies (24-3) had lost just once to a team from Minnesota. All three of their dual-meet losses came during The Clash Duals, a nationally prominent tournament in Rochester in early January. One of those losses was 45-18 to Class 3A champion St. Michael-Albertville.

After pulling out the semifinal victory, the Huskies, flush with confidence, never let Royalton/Upsala (25-2) get a whiff of success in the final.

In Royalton’s earlier matches, the Royals took early 12-0 leads after twice getting pins at the first two weights. In the final, Jackson County Central turned the tables, taking a 16-0 lead that it built into an insurmountable 27-3 advantage.

It was the Huskies first state title since winning four straight from 2010 through 2013.

“Last year makes this so much sweeter,” Freking said. “This whole team has been together since we were first-graders. We haven’t got any new kids or transfers, so it’s just been us since first grade. So to get it done with all of us is just an awesome experience.”