The notion of a sister-brother double is in play in a sport that tends to be family-focused. It’s no stretch: Audrey and Ryder Rogotzke of Stillwater are each seeded No. 1. 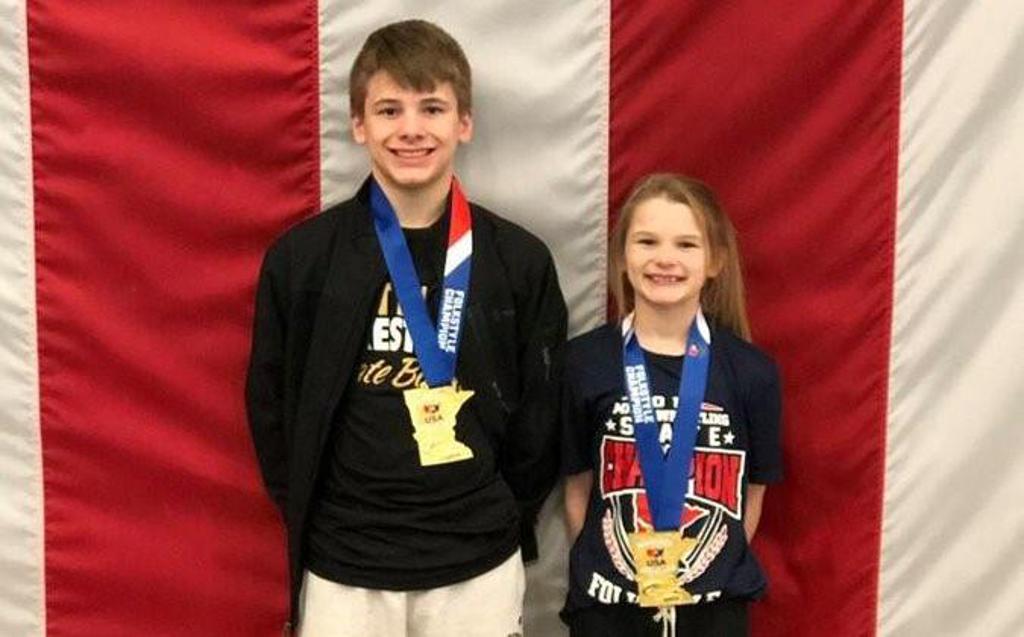 Ryder and Audrey Rogotzke of Stillwater were already winning championships together in 2018. Saturday they will go for a brother-sister double at the state wrestling championships.

The wrestling state meet has a long history of successful families.

The names Gagne, Short and Sanders, Berge, McKee and Ness dot an extensive list of brothers, cousins, uncles and fathers who have each won state championships, often more than one.

But this year there’s a chance to see a tournament first: a brother/sister championship tandem. The MSHSL’s addition of a girls’ individual tournament this year makes a possibility of something never before conceivable.

At least three sets of sisters and brothers are poised to take the mat in the respective individual tournaments, the girls’ portion of which will take place in its entirety Saturday: Simley’s Charli (100 pounds) and Cash Raymond (138, Class 2A), Northfield’s Ella (165) and Mason Nagel (heavyweight, Class 2A) and Stillwater’s Audrey (120) and Ryder Rogotzke (182, Class 3A).

It’s the Rogotzke siblings’ first state meet but far from the first time they’ve competed at the same meet. As girls’ wrestling has grown in recent years, girls’ meets and girls’ brackets have proliferated. Competing for a high school state championship adds an attractive element.

“I think it’s pretty cool to think about being the first brother and sister to win,” said Audrey Rogotzke, an eighth-grader who split time on the boys’ varsity and JV during the season.

Wrestling is a way of life in the Rogotzke family. Father Perry has made wrestling a priority, going so far as to build a full-size wrestling room in a previous house. Oldest son Roman won two state titles before going off to wrestle at South Dakota State. Ryder, a junior, has back-to-back third-place finishes at the state meet.

Audrey is accustomed to putting in as much time training as her older brothers and has gotten used to wrestling under difficult circumstances. While training her, father Perry has made a point of dismissing her gender as a reason for a losing.

“The great thing about wrestling is that you wrestle people at or around your own weight,” he said. “Girls don’t lose because they’re a girl. I’ve told her if you listen to all the stuff I teach Roman and Ryder and you, if you do all of that, it will always be the best person who wins.”

Both Ryder and Audrey are seeded No. 1 in their weight classes, leading to speculation that they have a legitimate shot at pulling off the sibling double.

“It’s going to be pretty cool,” Stillwater coach Tim Hartung said. “On paper, it looks like both have a really good chance. And if it doesn’t happen, they get next year to try again.”