A two-time Class 3A champion, he gave up the curly locks and powered his way to the semifinals. 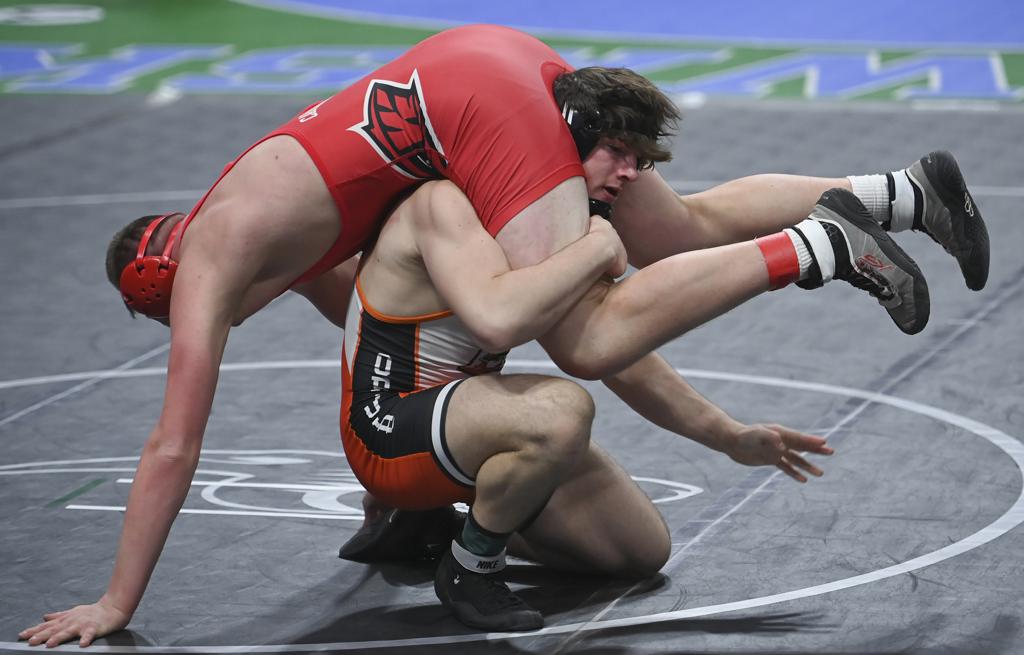 Lakeville North senior 132-pounder Jore Volk is a little lighter as he shoots for his third state championship. Always known for his shock of curly hair, Volk decided to shave it off a few weeks before the state meet. “I just wanted to start fresh,” Volk said. “I’m starting to get used to it, but it was kind of weird at first.”

This is no Samson and Delilah tale. Volk scored two second-period technical falls Friday, using quickness and preparation to overwhelm his foes.

“I like chain wrestling, trying to put two moves together,” he said. “Staying aggressive, staying on my offense. Sometimes my shot might not be there, but I always try to have a backup option. If I miss one thing, I try to get to another thing. It feels clean when you put it all together.”

Volk’s teammate and primary training partner, 145-pounder Zach Hanson, had a pair of first-day pins to move into the 145 semifinals. Volk, who’s headed for the University of Wyoming, said he wouldn’t be the wrestler he is without Hanson training with him.

“We practice together every single day, push each other,” Volk said. “It’s great to have him as a friend and a teammate. Having a partner of that caliber just helps you so much.”

To no one’s surprise, three heavy favorites in Class 3A — Waconia 195-pounder Max McEnelly and a pair of Stillwater wrestlers, 170-pounder Hunter Lyden and 182-pounder Ryder Rogotzke — had little trouble advancing to the semifinals.

McEnelly, a junior and two-time defending state champion, improved to 45-0 by pinning Tramaine Davis of Andover and getting a 26-11 tech fall over Antonio Menard of Lakeville North.

Lyden, a senior and also a two-time state champ, ran his record to 51-0 after a 10-0 decision over Ezra Formaneck of Eastview and a pin of Northfield’s Darrin Kuyper.

McEnelly has verbally committed to the Gophers and Lyden has already signed with the University of Minnesota.

Rogotzke, a junior, kept alive the goal of winning a state championship along with his sister Audrey, who will wrestle in the girls’ 120-pound class Saturday, by pinning both of his opponents, Vincent Toleno of Osseo and Cole Sutrick of Shakopee. Rogotzke is 54-1.

The son of former Olympian Brandon Paulson said he feels much more comfortable at the tournament this year and feels very little pressure despite his well-known father.

“I didn’t even look up at the fans at all,” Paulson said. “Just looked at my dad and I was ready.”

Did his father offer any prematch advice? “He just said, ‘Believe in yourself.’”

What about the champs?

Every 2021 state champion in Class 3A made it through to Saturday’s championship round. In addition to Volk, Lyden and McEnelly, Prior Lake’s Alan Koehler, 2021 106-pound champ, is in the 120 semifinals; St. Michael-Albertville’s Cole Becker, the 138-pound champ, is still alive at 145. Owatonna’s Landen Johnson can defend his 160-pound title, as can Osseo’s Jacob Meissner at 220. Meissner attends Maranatha Christian, but plays football for Providence Academy, where he was a second-team All-Metro football selection. He wrestles for Osseo because Maranatha does not have a wrestling team.