Classes 2A and 1A: Kasson-Mantorville's Bennett Berge makes it five state titles 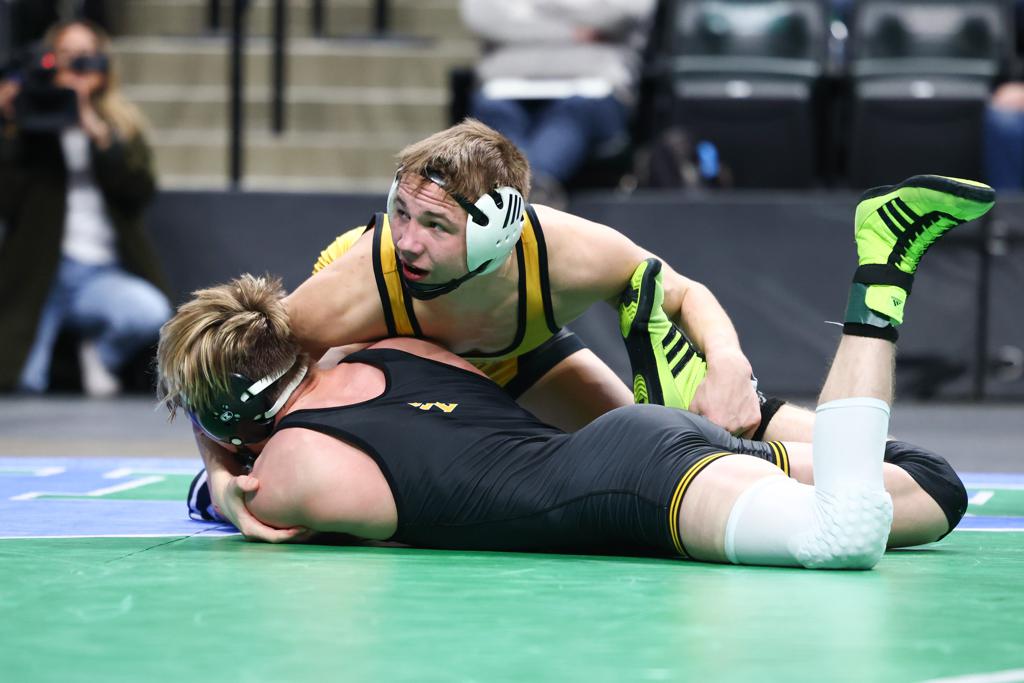 United North Central's Ethan Hendrickson looked to his coaches in the waning seconds of his 5-3 victory over Sibley East’s Drayden Morton. Photos by JEFF LAWLER, SportsEngine

Kasson-Mantorville’s Bennett Berge scored nine takedowns and a near fall to defeat Simley’s Soren Herzog by technical fall Saturday in the wrestling state championships at Xcel Energy Center and win his fifth Class 2A title, this one at 195 pounds, .

He even used a new move.

For one of his takedowns, Berge used the Winn Dixie, a move in which a wrestler uses one leg to hold down their opponent. “I’ve never done that in my life,” he said. “I mean, I’ve done it in practice but never once in a match. I couldn’t hold back my smile after that.”

By winning another title Saturday, Berge became the fifth wrestler in Minnesota history to win at least five.

This year’s title was the 11th combined between Berge and his older brothers, Broc and Brady, both of whom have been Division I college wrestlers. Broc and the Berges’ father, Kevin, are assistant coaches on the Kasson-Mantorville staff.

Like his family, Bennett Berge also said he expects to be part of the Kasson-Mantorville team for years to come.

At 220, junior Gavin Nelson, who has committed to Minnesota, pinned Pine City/Hinckley-Finlayson’s Justin Matson in the first period to win his second straight title. At 113, junior Brandon Movari won his first title with a 4-0 victory.

“It feels good,” Morvari said. “Obviously I’m excited, but I know I worked for it.”

Nelson, who was competing in his fourth state tournament, said he aimed to show “how big of a gap there is between me and the rest of the state of Minnesota.”

He said he’s proud of how Simley performed as a team at state, adding that the perennial powerhouse Spartans feed off of the occasional boos from the crowd.

Morvari, who finished third at 106 last year, said he tried to stay low during his match and work on his counter attacks. He secured the match-winning takedown in the first period and added another takedown in the third.

Byron senior Maxwell Petersen won the Class 2A 106-pound championship as an eighth-grader. Being born into a well-known wrestling family, it was assumed that was the first of what would be many more state titles.

“I felt a little bit snakebit, with all of the hard work I’d put in,” Petersen said. “It was some good opponents and nerves, but I learned to control them and just wrestle.”

When the time ran out, Petersen let loose three years of emotional disappointment with a one-handed roundoff followed by a back flip.

“Throughout the whole year, I felt dominating. I felt I could take anyone down,”

he said. “That was just everything exploding.”

At 160 pounds, Jackson County Central senior Payton Handevidt had a match-winning takedown in the first period to defeat Tate Hermes of Medford 7-0 and win his third Class 1A title.

Handevidt, who will wrestle for Augustana next season, also had takedowns in the second and third periods.

“I was just trying to control the whole match, always working toward my stuff, being smart and just doing what I’m best at,” he said.

“Just everything I’ve worked up my whole life for is just here,” he said. “It’s just amazing.”

Handevidt was one of three Jackson County Central wrestlers to win an individual championship on Saturday. At 113, sophomore Nolan Ambrose won his second title, and senior Kie Anderson won at 120.

“I’m just so proud of everyone — all the hard work we’ve put in all season — and it shows,” Handevidt said. “We all got what we wanted.”

Ethan Hendrickson of United North Central, a co-op of Menahga and Sebeka high schools in Wadena County, lost to Drayden Morton, a three-time state champion from Sibley East, in the Class 1A championships finals last year. On Saturday, the senior defeated Morton to win his first state title.

Hendrickson, who trailed 3-0 after two periods, secured a near fall midway through the third period to take the lead. He stayed on top of Morton, who’s ranked No. 1 at 145 in Class 1A, for the final minute to secure the 5-3 win.

“Going into the match, we wanted to grind on him, push the pace, wear him out,” said Hendrickson, who’s ranked second at 145 in Class 1A. “I think we did that. … We kept grinding, put him to his back for five [and] rode it out for the win.”

His title is the first in program history for United North Central; before the schools combined, Menahga won one title. “It feels amazing,” Hendrickson said.of being the first title-winner in co-op history. “I couldn’t have done it without coaches, family, friends [and] all my practice partners.”