Class 3A: Stillwater's Ryder Rogotzke breaks through with his 44th pin, a state record 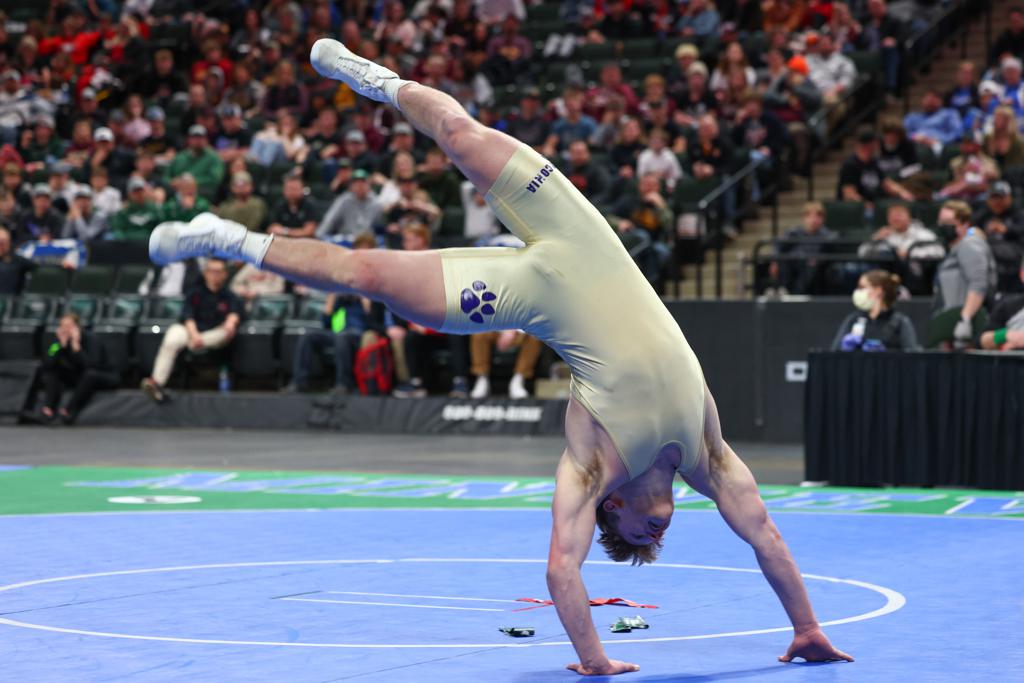 After two consecutive Class 3A semifinal losses, Saturday was the night when everything came together for Stillwater junior Ryder Rogotzke.

Not only did his younger sister Audrey win a state championship, he completed a season of dominance by pinning Prior Lake’s Cole Edwards at 3:48 to win the boys’ 182-pound title at the state meet. It was his state-record 44th pin this season.

“It felt great to finally close out one of the first goals you make when you start wrestling: Win that varsity title,” he admitted.

Older brother Roman won two state titles. Getting one of his own was immensely satisfying.

“It was icing on the cake. I think I’ve been waiting for it for awhile,” he said. “I won the Super 32 [tournament], made the Pan Am team, been ranked No. 2 in the country, but I didn’t have a state title.”

Lakeville North junior Zach Hanson watched teammate Jore Volk win three state championships — Volk won his third Saturday by beating Anoka’s Eli Paulson 5-3 at 132 pounds — and had gotten close to a title twice with runner-up finishes but was still searching for a title of his own.

“I’ve been blessed with a lot of opportunities and I got to wrestle with Jore Volk. He’s pretty good,” Hanson said. “I got to bang heads with him. He got me better every day.”

In 2021, Stillwater’s Hunter Lyden won the 170-pound championship after a season of injuries, including stress fractures in his ankle. “There was no warming up before matches. You just went out and wrestled,” he said. “There was too much pain.”

The Gophers commit defended his title this year while feeling completely healthy. He beat Cole Han-Lindemeyer of Farmington 11-3 for his second straight 170-pound title. It was his third overall; he won at 152 as a sophomore.

“I consider that to be my state title,” Lyden said before the finals, referring to the fact the state meet was held at St. Michael-Albertville High School last year due to COVID precautions.

Waconia’s Max McEnelly finished another undefeated season with his third straight Class 3A state title, beating Shakopee’s Jadon Hellerud with a 22-7 tech fall in the 195 final.

The victory just confirmed what most who follow McEnelly say, including McEnelly himself. “When it all comes together, I think I’m the best wrestler in Minnesota and one of the best in the country,” he said. “My mentality is I’m going to go out the and dominate kids and nothing’s going to stop me.”

McEnelly even paid homage to one of his role models, Gable Steveson, with a celebratory backflip.“I did a coupleof practice runs before the tournament,” he said. “I think the crowd loved it.”

With a 3-2 victory over Shakopee’s Jade Trelstad in the heavyweight final, Eden Prairie’s Will Sather became the first sophomore heavyweight champion in state history. “My coach mentioned that to me. It’s cool.”

Cole Becker lost at 145, and Jed Wester got beat by Owatonna’s Landen Johnson at 160. It was Johnson’s second consecutive championship.