The senior wrestler, who has committed to Minnesota, has his sights on another state title before graduating. 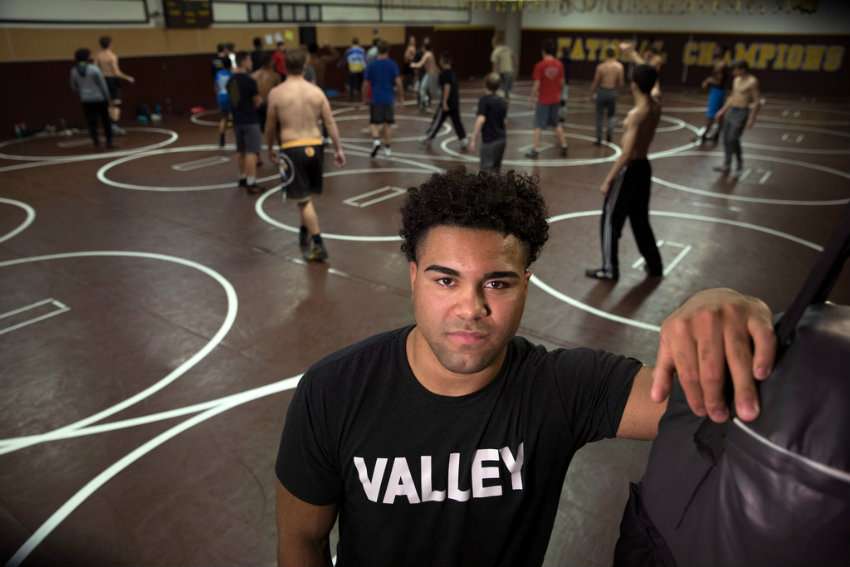 Gable Steveson enters this season with 134 consecutive victories to go with his two state championships at 220 pounds and another at heavyweight last year after pinning his final opponent in an astonishing 11 seconds. Star Tribune photo by Brian Peterson

Leaning away from an interview in the hallway after school, Apple Valley wrestler Gable Steveson called out to football coach Chad Clendening, who just happened to be walking past.

Clendening turned and shook his head. “That’s a broken record. From the day he walked into Valley Middle School, I’ve been on him.”

With good reason. Steveson, a senior, is the No. 1 high school wrestler in the nation. A heavyweight with an unmatched of blend of strength and speed, balance
and bravado. He’d be devastating as a defensive end, for example. He stands just six-feet tall and weighs upwards of 250 pounds, but dunks a basketball with ease. He skated with the Apple Valley hockey team earlier this season (“I’ve skated before but that was the first time I’ve played hockey,” he said) and held his own.

“He amazes me every single day,” Apple Valley wrestling coach Josh Barlage said. “You go to my Twitter page, you’ll find numerous videos of him doing backflips. Talk about being a true athlete. There’s really nothing he can’t do.”

He could play just about any sport he wants and the sport he wants is wrestling. It’s been that way since birth, when his mother named him for wrestling legend
Dan Gable.

Since arriving in Minnesota as an eighth-grader, Steveson has been dominant on the mat. That year, he lost in the finals at 195 pounds to Alexandria’s Justin
Cumberbatch and hasn’t lost since, a string of 134 consecutive victories going into this season. He’s got two state championships at 220 pounds and another at
heavyweight last year after pinning his final opponent in an astonishing 11 seconds.

“That loss drives me,” Steveson said. “I don’t ever want to see another person’s hand get raised. I always want my hand to be the one that’s raised.”

“I was on a team with a lot of NCAA champions, so for me to be that young and winning, it was thrilling,” he said. “I won the match that made us win the team title. That felt really good.”

Growing up in Indiana with his older brother Bobby, now a sophomore 197-pounder with the University of Minnesota wrestling team, the Steveson boys were no different than most sets of brothers.

“We would throw a couple of hands here or there, not really a big deal,” Steveson recalled. “We’d start punching each other, someone would break us up, then the next day we’d come back and wrestle like usual.”

Those battles have paid big dividends. Without Bobby to push him, Gable said, he wouldn’t be anywhere near where he is today. “There would have been no one to
set the bar for me,” he said.

While nature and nurture have both played outsized roles in Steveson’s career, a big part of his success can be traced to his belief in himself and his abilities. He wrestles with an obvious confidence, knowing he’s going to come out on top.

“It comes from my mom. When I was younger, she used to always tell me how good I was,” he said. “She would say ‘I want to see your name in a book.’”

As he’s gotten older, he’s made it a point to soften his aggressive edges. He knows that his level of success brings out cynics and detractors looking to take him down a notch, so he pays extra attention to how he’s perceived.

“It feels good, when I walk into a gym, to hear kids say ‘What’s up?’ and want to take pictures and stuff like that,” he said. “I’ll sign anything or take a picture with anybody because I was that same little kid when I was younger.”

Barlage, a longtime assistant at Apple Valley before taking over as head coach this season, has seen Steveson mature since he arrived five years ago. 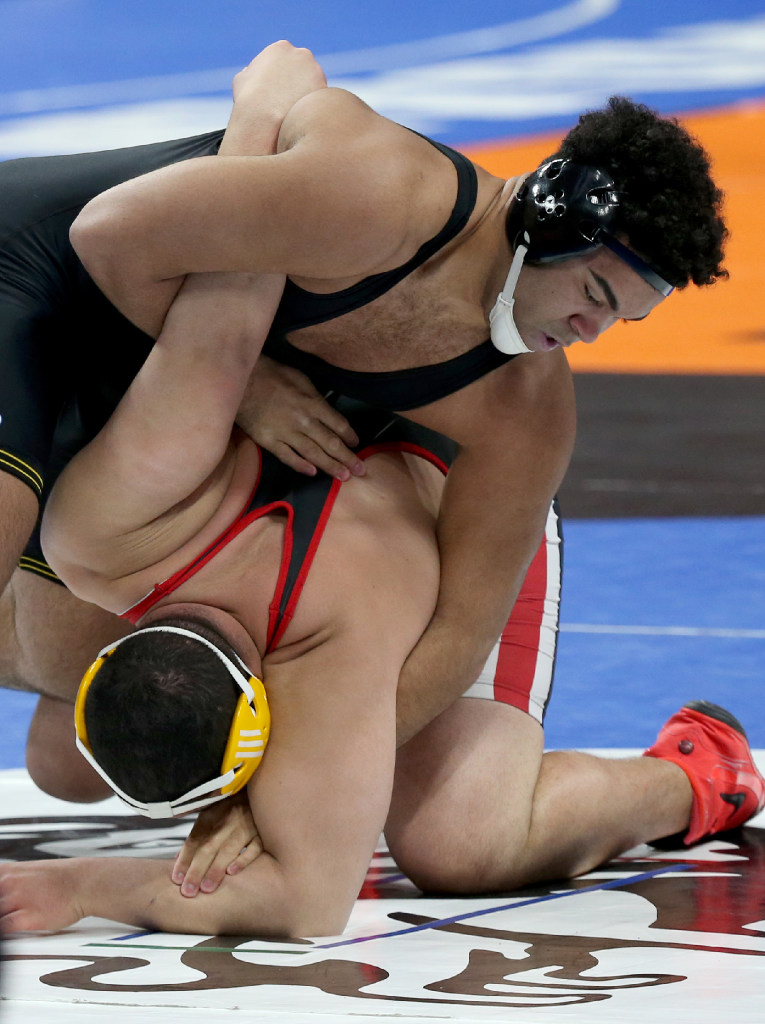 Steveson in last year's state tournament as a junior, where he competed as a heavyweight and won the state title. Star Tribune photo by Kyndell Harkness

“He’s still a 17-year-old student, so we continue to work on life lessons,” Barlage said. “He’s come along way in his leadership ability. He’s grown a lot as a person.”

Steveson has one more season of high school wrestling ahead of him before he joins Bobby at Minnesota. He had a chance to skip his senior season and spend it training at the U.S. Olympic Training Center in Colorado Springs, but realized there’s a lot of wrestling in his future. High school? Not so much.

“I just wanted to come back and be with all my guys for one last year,’’ he said. “After this, we won’t ever be on a team together.”