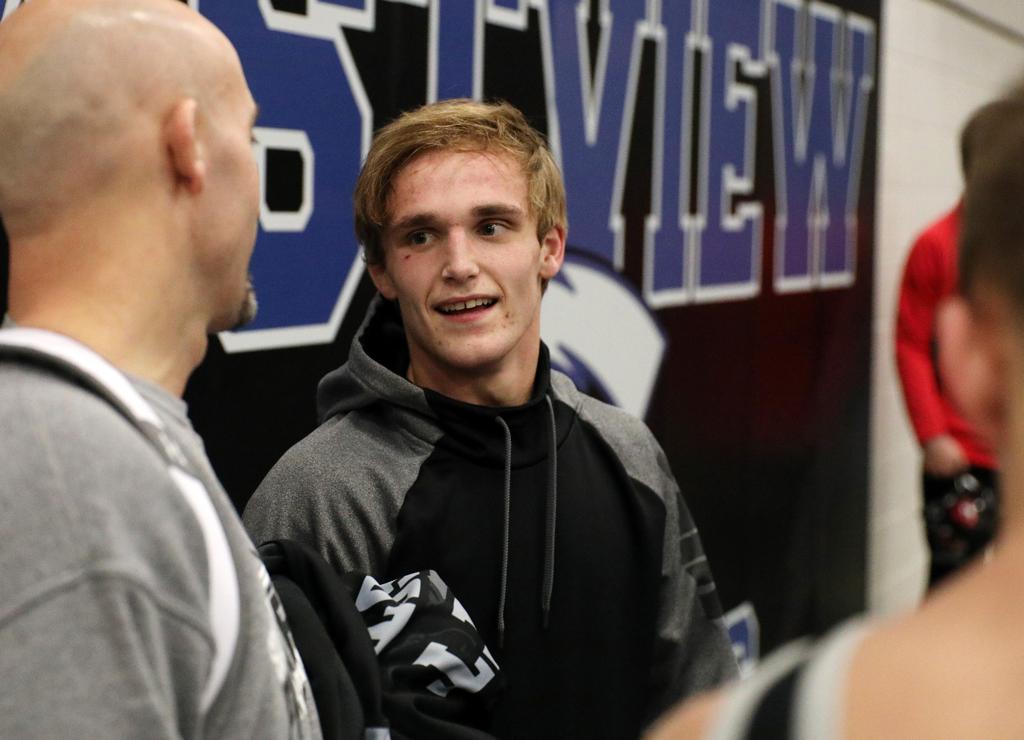 Tyler Buesgens and Jackson Stauffacher have been inseparable since elementary school. Growing up in neighboring communities, not to mention rival school districts, didn’t deter them. Their infatuation for wrestling was much greater.

The bond they share resembles their team, Scott West. It’s a cooperative program for the Belle Plaine and Jordan school districts. Buesgens goes to school in Jordan and Stauffacher in Belle Plaine.

“I think I have more friends from Jordan than Belle Plaine,” Stauffacher said. “Our wrestling bond is a lot closer than other sports.”

He and Buesgens, both seniors, got their start in the Panther Cub program, which is for young wrestlers in the two towns. It’s open to pre-kindergarten through sixth-grade students.

“I think we were first connected before kindergarten,” Buesgens said. “We really became close in seventh grade.”

Scott West has 43 wrestlers in the high school program (seventh through 12th grade), including 26 from Belle Plaine, 15 from Jordan and two from Holy Family Academy, also located in Belle Plaine.

“Without the co-op I don’t think either school would have wrestling,” said Scott West co-head coach Jerold Stauffacher, who is Jackson’s father and whose younger son, junior Justin, also is on the squad. “The number of kids in the program just doesn’t suggest either school could survive.”

The varsity’s 14 weight classes are filled by nine wrestlers from Belle Plaine and eight from Jordan.

“Overall, I would say the split is pretty even,” Jerold Stauffacher said. “That is this year. It changes each year.”

One thing that doesn’t change is Scott West being a Class 2A power. The cooperative program, founded in 1990, is in its 28th season, and 17 of those have ended in state tournament appearances.

“This is a tough sport and the requirements to be very good are demanding,” Jerold Stauffacher said. “They have had success, so asking them to do a little more is a bit easier because of the success they have had.”

Buesgens added that those requirements extend to the youth levels.

“We’ve been good for quite a while, and have built a strong tradition,” Buesgens said. “Our younger wrestlers don’t want to be part of a group that breaks that tradition.”

Buesgens and Stauffacher, once very much a part of that youth movement, are now varsity captains.

“The time has really gone fast,” Stauffacher said. “We’ve gone from being the kids of the program to the leaders of the team.”

The Guillotine has Scott West ranked No. 3 in Class 2A, and third is the position where the Panthers have finished each of the past three seasons (five times overall) in the state tournament. They have been runners-up four times, but have yet to win a state championship.

“Having never won, it adds fire to us,” Buesgens said. “It gives us something extra to push for since it has never happened.”

“We are working on turning our weaknesses into strengths,” Buesgens said. “We have to get comfortable being uncomfortable. We have to work until we are dead tired, and then keep working some more.”

All of which he hopes will help the team bring home that elusive championship trophy.

“It should make us tougher in the end,” Buesgens said. “It sure would be nice to celebrate as a team.”