Respect between world champions obvious to standing-room only crowd 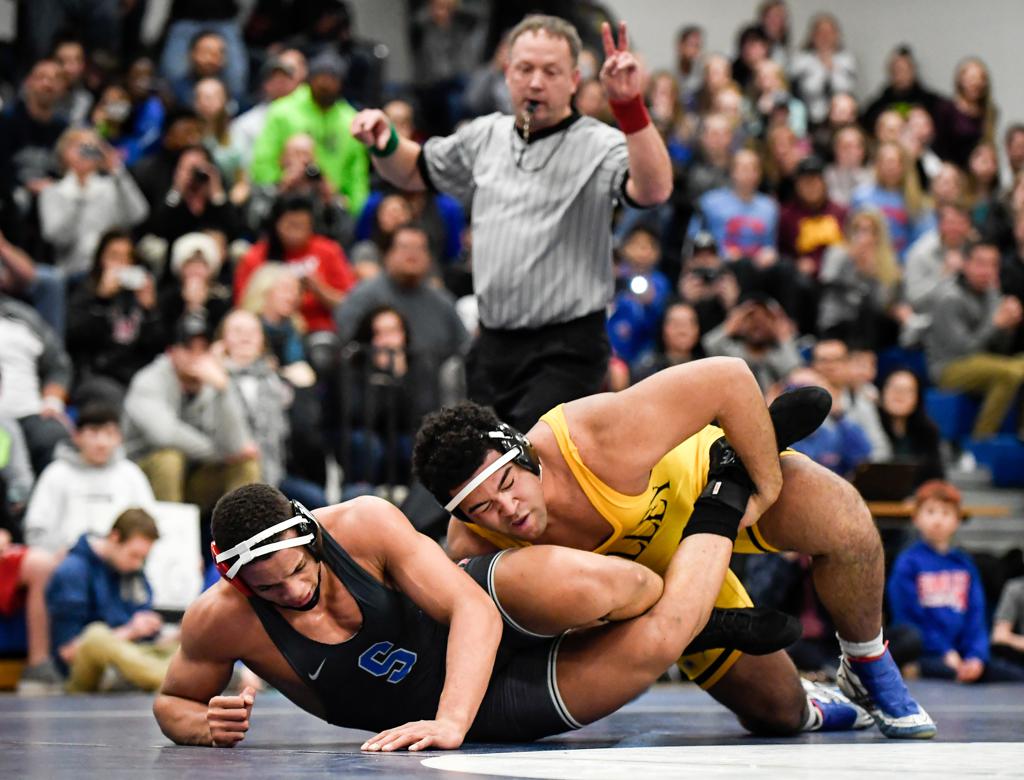 There weren’t any fireworks or surprises. The standing room-only crowd at Simley waited impatiently to let go with an explosion of emotion that never came.

In an exhibition of caution mixed with a large helping of respect, Apple Valley senior heavyweight Gable Steveson outlasted Simley junior Daniel Kerkvliet 3-2 in the most highly anticipated individual wrestling match of the season.

Both wrestlers came in with impressive résumés. Both were undefeated, both are defending state champs and both had won world championships last summer. Both are ranked No. 1 nationally at their respective weight classes by Trackwrestling.com: Kerkvliet at 220 pounds, Steveson at heavyweight.

Matches of this caliber don’t come around often.

The buzz for Friday grew as the week went on. Many in the local wrestling community viewed the match, which was hyped nationally by wrestling websites, as a boon for Minnesota prep wrestling. Simley coach Will Short said during the week, “I don’t think this has ever happened, two world champions wrestling in a high school event.”

The gymnasium at Simley holds roughly 2,000. In anticipation, Short, who is also the school’s activities director, made sure to notify the Inver Grove Heights fire marshal of a possible overflow crowd. While they weren’t turning people away, it was standing room only in the gym 15 minutes before the team competition began.

Despite the buildup, the match played out cautiously, both wrestlers wary of the other.

The match was tied 1-1 early in the third period when Steveson saw an opening and shot Kerkvliet’s leg, earning two points for a takedown and taking control of the match. Kerkvliet earned a point for an escape later in the period but could not get the equalizer against Steveson, who enjoyed a nearly 40-pound advantage.

“I saw his stance and I knew I was going to get [the takedown],” Steveson said. “I should have gotten more.”

Steveson, whose quick pins have become legendary, was pleased with the victory but not with his performance.

“I knew it was going to be challenge,” he said. “I expected to come here and get a tech fall or a pin but I didn’t do that. It was a good match, but I’m not happy.”

Despite losing for the first time this season, Kerkvliet wasn’t displeased with the outcome. Last fall, he changed his college commitment from the Gophers to Oklahoma State in anticipation of wrestling at heavyweight in college. Steveson has signed with Minnesota, which created an obstacle at the weight.

“Now I know what I have to work on,” Kerkvliet said. “I’ve been trying to get more matches against heavier guys so I can get ready for college. There was a lot of hoopla around it. It was a fun atmosphere.”