Tyheem Cobb practices with two former college wrestlers at 133 and 141. 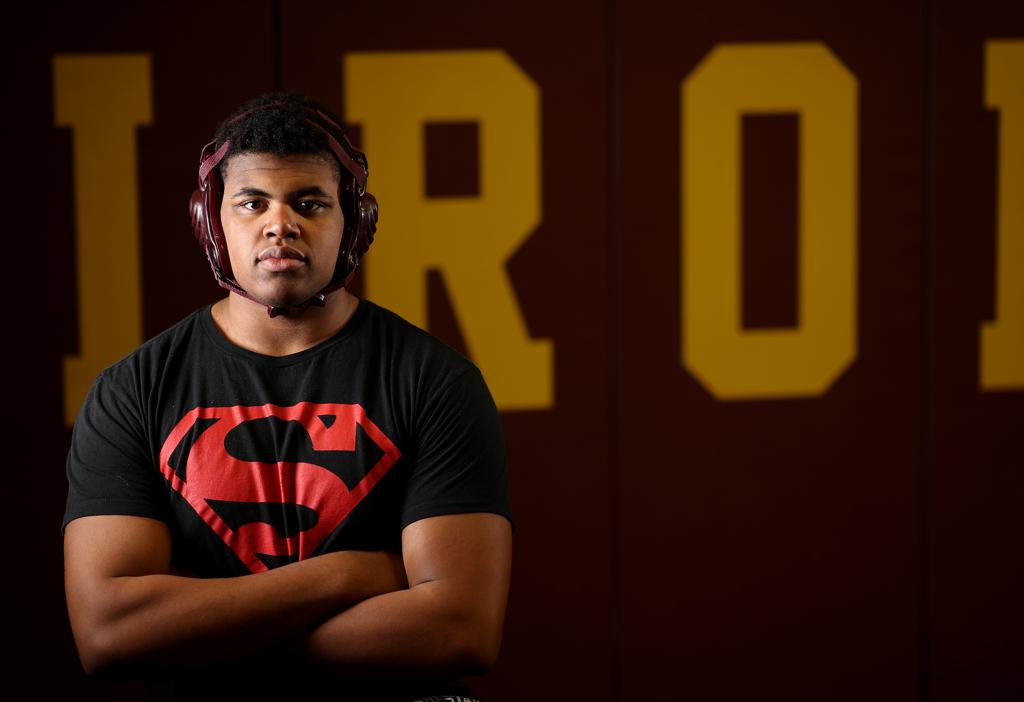 Irondale senior Tyheem Cobb will compete this fall against fellow big guys for a spot on the Bemidji State offensive line. For now, the 6-2, 270-pounder is sharpening his wrestling skills in practice thanks to two guys half his size.

Cobb, who last week made his debut in the top 10 heavyweight rankings of a Minnesota wrestling publication named The Guillotine, benefits from bouts with twin brothers Dustin and Ryan Weinmann, Irondale graduates turned assistant coaches with impressive résumés.

On the surface, the fight seems unfair. The Weinmanns wrestled as seniors at Wisconsin-La Crosse last season, Dustin at 141 pounds and Ryan at 133. What they give up in size, however, they make up for in technique.

“They are a lot heavier than they look and they are constantly moving,” Cobb said. “It helps me because it’s different than just bumping chests with a 280-pound guy the whole time. I have to get into a stance and take shots.”

Improved mobility and technique, coupled with his own athletic ability, have helped vault Cobb into the mix of the state’s best. Twice he defeated Tartan’s Brandon Floyd, knocking him out of The Guillotine’s latest top 10 rankings. He lost to Lakeville North’s Bryce Benhart, a junior ranked No. 4, and North St. Paul’s Corey Guenther, a senior ranked No. 3.

His efforts earned Cobb a place in the Jan. 26 rankings. But he had no idea until teammates broke the news to him three days later.

“I don’t really pay attention to it that much because any ranked guy can lose,” Cobb said. “I’m proud of myself, but I need to keep on working and moving up.”

He will get a chance this week. Cobb figures to face Floyd and Guenther in a quadrangular meet Thursday at North St. Paul. In addition, Centennial will take part, making the match a gauge of who holds sway in Class 3A, Section 4. In their last meeting, Cobb fell 2-1 against Guenther on an escape.

“He has a pretty gnarly mustache,” Cobb said of Guenther.

Growth in confidence and ability fueled Cobb’s victories, many coming by pin. His weight is up 30 pounds from last season.

“My intent is to always pin the guy and put him down as quickly as possible,” Cobb said. “That wasn’t as big of a thing for me in the past. I used to go out and just try not to get pinned. Now it’s not like that.”

The Weinmanns watch at matside as Cobb puts their tutelage into action. Ryan was a conference champion in college. Dustin was an NCAA Division III national champion last season.

Cobb proved a quick study, mixing “aggression and creating angles. Constantly moving because I’m quicker than a lot of the bigger guys due to working with the Weinmanns.”

Ryan instilled an attack mentality in Cobb while first working with him.

“I just had the mentality of, ‘Let’s see what this heavyweight can do,’ ” Ryan said. “I had fun getting underneath and pushing him around the room.”

Those days are over.

“Coming back this year, he’s matured, gotten a lot stronger and figured some things out,” Ryan said. “It’s started to click, wrestling-wise. He’s a little scary to wrestle this year. We want to keep our distance.”

Opponents don’t have a choice.

“When he gets someone down, he punishes them,” Ryan said. “And when he’s on his feet, he’s starting to find angles a lot better. He’s not just diving under there. He picks his spots to shoot and when he does, he just attacks and knows he’s going to go get the other guy.”