Minnesota's best girls' wrestler just wants to be a wrestler

For now, Centennial wrestler Emily Shilson is driving toward becoming the first girl to win a match at the state meet. But she has much bigger dreams than that. 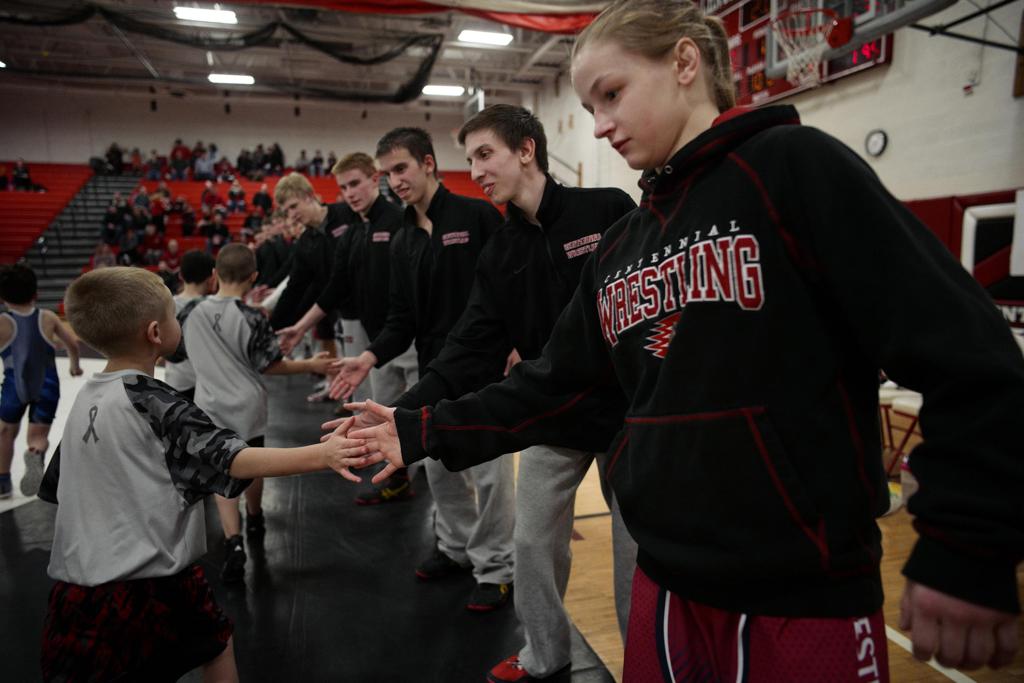 At first glance, little appears exceptional about Centennial junior Emily Shilson as she prepares for a wrestling match, except that, though she competes at 106 pounds, the lightest weight, she seems on the smallish side.

Ponytail tucked under a black skull cap and covered by standard headgear, she’s constantly in motion, bouncing on the balls of her feet, stretching, running a few quick sprints to break a sweat. Just another wrestler warming up.

But then you see the glare. It’s at once a look of steely determination and intense focus, her mind solely on the task in front of her. It’s impossible to ignore, even though it’s directed mostly inwardly, where she’s lost in thought and preparation and intent. For the next 6 minutes, Shilson’s entire world is the 38-foot-by-38-foot wrestling mat.

“Some people call it intensity,” said her father, mentor and coach, Chad. “We call it focus.”

Shilson’s single-mindedness has made her arguably the most successful female wrestler in state history. Last March as a sophomore, she became just the second girl to compete at the state meet, where she lost her first-round match. She has a strong chance to return, having been ranked in the top 10 in Class 3A for much of this season.

“She has every intention of being the best wrestler,” Chad said. “She doesn’t screw around. She pays attention to detail. Whatever she does, it’s going to be the best possible effort she can give.”

Simply making the state meet is not enough for Shilson. “I want to win matches there,” she said. Winning just one would be a first for a girl, but even that wouldn’t be enough.

“I want to place,” she continued. “That would be cool.”

Cool, yes, but Shilson’s high school goals are merely steps in her master plan to dominate women’s wrestling at the national and world levels. Wrestling high school boys has its advantages, certainly, but in the outline of Shilson’s personal agenda, it’s not a high priority.

“I do high school because there’s a lot of tough guys in Minnesota and it’s good to get good competition,” she said. “I don’t really have that with girls in Minnesota.”

Focus, driven from the start

Shilson was 5 years old when she announced she wanted to wrestle.

Her father was, and still is, a dedicated wrestler, having competed for Division III powerhouse Augsburg and now at the senior level. Older brother Tyler started wrestling at a young age and now competes for Wisconsin. Emily would accompany her father and brother to workouts.

“I was always sitting by the side, and one day I asked if I could wrestle,” Shilson said.

Even before she asked, Chad noticed that Emily had an aptitude for one of the most grueling individual sports. “She danced for one year, but it didn’t fit her personality,” he said. “She had started coming to Tyler’s practices when she was 2, and whenever she was on the mat, we noticed that she was really aggressive. She’d flip the switch.”

So Dad agreed, with one caveat: that she always gave maximum effort.

“She said, ‘OK, Daddy, I will,’ ” Chad recalled. “Since then, she hasn’t given anything less than 100 percent. Sometimes, we have to back her off. She’s that focused and driven. It’s incredible.”

She hasn’t missed a day of training in more than six years, and she has the calendars, each day marked off, to prove it.

“She marks down her weight, morning and night, and she does it in kilos and pounds. How many kids weigh themselves in kilos?” Chad asked. “I never told her to do that. She knows if she’s going be the best, she’s going to do everything possible because it’s on her.”

Even in the dedicated world of wrestling, however, Shilson’s work ethic and devotion to improvement impress even the most hardened veterans.

“She’s a very hardworking, focused, intense wrestler,” said Brandon Paulson, a 1996 Olympic silver medalist who has coached Shilson at the Pinnacle Wrestling Club in Shoreview since 2009. “She has her goals in mind and is pretty strongly set in what she wants to do.”

Girls dot boys’ team rosters often enough now that it’s not a novelty anymore. What sets Shilson apart are her accomplishments. With a muscular upper body and a compact, athletic physique, she has chalked up 100 career varsity victories against boys.

“It’s getting pushed in a different way,” she said. “The guys are a lot stronger.”

Chad, who is the women’s wrestling director of Minnesota USA Wrestling, organizes a twice-monthly open practice at Augsburg for local women. It’s here that Emily is a centerpiece, a place where her commitment to her craft is held in high esteem. Others see her drenched in sweat and use it as motivation.

“It’s crazy how determined she is,” said Kahlea Jolly, a Centennial teammate and a regular at the workouts. “She’s always the hardest worker. I look up to her as a role model. Most of the other girls do, too.”

Shilson has participated on two national teams and has one national championship. She was a silver medalist at the 43-kilogram weight class at the Women’s World Cadet Championships in Greece last summer. The loss still bothers her because she knows she let her mental guard down just enough to get beat.

“It was the kind of match where, if I’d done one thing different, the outcome would have been different,” she says, her usual quiet voice dropping just barely above a whisper.

It’s no stretch to say that, despite her 5-1, 106-pound frame, Shilson is the best female wrestler in the state. It’s a mantle that has her conflicted.

“I want people to see me not as a girl wrestler but as a wrestler in general,” she said. “But being a girl wrestler, it’s cool seeing the younger girls doing the same thing that I did. They have more opportunities now than I did when I was that age.”

What drives Shilson? Even her father is unsure, although he suspects that his nature plays a part. “I think she gets some of that from me,” he said. “I’m extremely focused. I go on these streaks, like not having had a potato chip in 10 years. I’ve run every day for seven years.”

Says Paulson: “She’s an intense person, more than most. Can she make the Olympics? Absolutely. She wants to make it in 2020, but she’ll have to get bigger and stronger. For sure in 2024.”

For Emily, it’s simple. There is nothing she loves more than taking the mat. “It’s fun. I get to go out and push myself as hard as I physically and mentally can,” she said. “My coach always says, ‘Love the fight.’ And I love the fight.”