The Sabers, after coming close a year ago, defeated the Eagles 34-30 in the Class 3A, Section 2 championship. The Eagles had won the past 12 state titles and had not missed a state tournament since 1982. 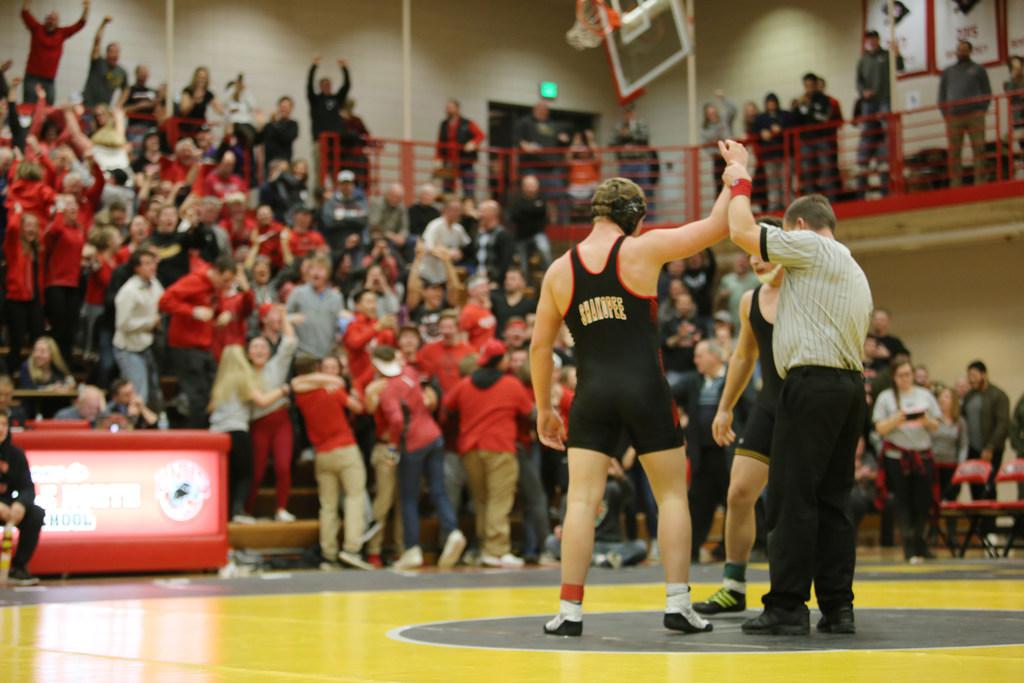 Tommy Johnson of Shakopee pinned Michael Swanstrom of Apple Valley in 2:43 in the 220-pound match, giving the Sabers an insurmountable lead to clinch the victory. Pjhoto: Ellen Schmidt • ellen.schmidt@startribune.com

One year after getting oh-so-close, Shakopee pulled off the biggest victory of the year in Minnesota prep wrestling, defeating Apple Valley 34-30 to win the Class 3A, Section 2 championship on Friday at Lakeville North High School.

The Sabers’ victory Friday came after they had defeated Apple Valley 32-30 during the regular season, earning them the No. 1 ranking in the state and the top seed in the section.

They prevailed over an Apple Valley program loaded with impressive streaks, including its remarkable string of state tournament appearances dating to 1983. The Eagles had won 18 of the past 19 Class 3A state titles, and 26 titles overall.

Jackson, to add another element of drama to the finals, spent much of career coaching Apple Valley, winning 618 matches and 14 state championships before leaving in 2012.

“To be honest, I thought we could have won it last year, but we did it this year, so we’re happy.”

While the streak was fodder for fan interest, Apple Valley first-year coach Josh Barlage said his wrestlers never were interested in what happened in the past.

“Lots of people want to talk about the streak, but to be real honest, this team has never focused on the streak,” Barlage said. “We weren’t concerned about all the previous years. We were focused on this match. That’s a well-coached team, and we needed to be at our best to beat them. Hats off to them.”

Shakopee benefited from a pair of victories at the lower weights that could have gone either way, with Ben Lunn getting an 8-5 decision at 113 pounds and Tyler Jones winning 8-6 at 126 pounds with a late reversal.

A third Shakopee freshman, Tommy Johnson — Joey’s twin brother — clinched the victory with a pin at 220 pounds, giving the Sabers an insurmountable 34-24 going into the heavyweight match.

“We’ve had them in our cross-hairs for a while,” said Lloyd, a two-time state champion who is undefeated and ranked No. 1. “We’ve worked our butts off the whole year, even the year before. It’s a great feeling knowing their tower is being broken down and another one is growing.”