Wrestling story lines: Shakopee the 3A team to beat for a change 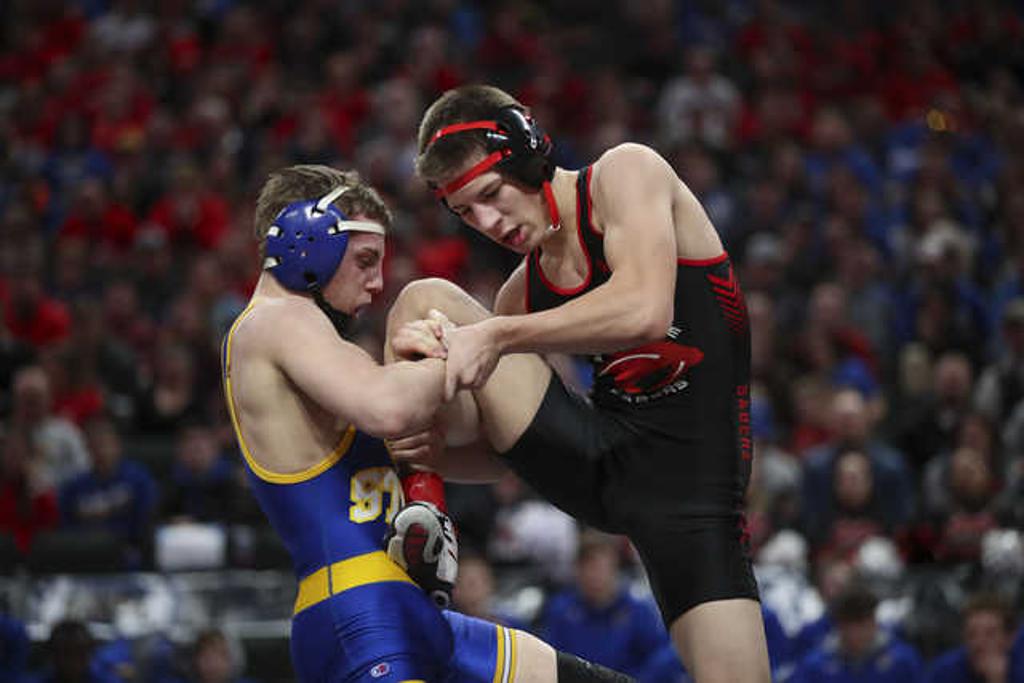 Shakopee pulled off the biggest state wrestling news in quite some time when it kept perennial state champion Apple Valley from another state tournament with a 34-30 victory in the Class 3A, Section 2 finals. The Sabers, who finished second in the state meet after falling to St. Michael-­Albertville in the championship match, hold the top spot in this season’s state rankings by theguillotine.com. Leading the way are juniors Paxton Creese, ranked No. 1 at 113 pounds; Ben Lunn, No. 2 at 120, and Jack Casey, No. 8 at 195. Twin brothers Joey and Tommy Johnson are scrappers at the upper weights. The Sabers added talent in sophomore Carson Manville, who is back in Shakopee after spending his freshman year at Wyoming Seminary in Pennsylvania, and his younger brother Pierson, a seventh-grader. Both Manville brothers are ranked No. 2 in their weight classes, Carson at 152 and Pierson at 106.

STMA changes leaders
The defending Class 3A champion, named the Star Tribune’s Boys’ Team of the Year in June, has a new coach. Longtime head coach Dan LeFebvre retired after last season and has been replaced by assistant coach Josh Joriman, who competed for highly regarded wrestling programs at Centennial High School and St. Cloud State. The Knights lost superstar Patrick McKee to graduation but have plenty of talent back, led by seniors Brandon Psyk (113 pounds) and Nathan Nygaard (126 ) and juniors Wyatt Lidberg (170) and Carl Leuer (182).

Traditional powers strong
Lest anybody think things have slipped at longtime powerhouses Apple Valley and Simley, think again. Apple Valley coach Josh Barlage might not have a nationally top-ranked wrestler like Gable Steveson or Mark Hall, but there is talent in the program. It includes Regan Schrempp (126), Sebas Swiggum (145), Brady Gross (152) and Devin Roberts (160). At Simley, heavyweight Daniel Kerkvliet is considered pound-for-pound the top wrestler in the nation. He’s battling back from a knee injury but should be ready to take the mat in January. He’s not the only wrestler of note for the Class 2A, No. 2 Spartans, who have depth throughout the lineup in Chase DeBlaere (120), Ryan Sokol (132), Cael Berg (138), Antonio Everett (145), Jacob Hageman (160), Nolan Wanzek (170) and Quayin Short (182).

Shilson changes schools
Emily Shilson, who qualified for the past two state tournaments while wrestling for Centennial, will spend her senior season at Mounds View. Shilson had a terrific non-high school season, winning two national titles en route to the women’s 43-kilogram championship at the Cadet World Championships in Zagreb, Croatia. She is ranked No. 5 in Class 3A at 106 pounds but has yet to win at the state meet.

Weight-class dilemma
Last spring, at the urging of wrestling coaches, the Minnesota State High School League approved cutting the number of weight classes from 14 to 12 for a two-year trial period. The 106- and 195-pound weights were removed only for regular-season dual meets. The default number of weights for any meet is 12 but can be pushed up to the previous standard of 14 weights if coaches agree in advance. Backers of the change felt filling out a lineup with 14 weights was proving difficult at smaller and less established programs. “Depth is a challenge for us,” Dassel-Cokato coach Bryan Clemen wrote in his preseason preview. Forfeiting a weight is an automatic six points for an opponent. Most metro schools and conferences decided in advance to stick with the previous 14-weight format, however, and many coaches are skeptical. “I suspect the feeling among coaches is that a win with 12 weights ... is not something to really take pride in. Coaches would rather roll the dice at 14 weights, because if they do pull off a win, they can actually enjoy it,” wrote Roseville coach Michael Holmes.

Metro top 10 teams
(All Class 3A unless noted)