Apple Valley's Sebas Swiggum unbreakable off the mat, too

Adopted from an orphanage, he’s worked to overcome a learning disability to achieve a 4.0 GPA. After pursuing a state title this week, he’s headed to Minnesota to wrestle and pursue a career as a surgeon.

Apple Valley wrestler Sebas Swiggum maintains a 4.0 GPA and plans to attend the University of Minnesota after high school to wrestle and pursue a career as a surgeon. Photos: TONY SAUNDERS * anthony.saunders@startribune.com

Apple Valley wrestling coach Josh Barlage has a seemingly endless list of superlatives he uses when he talks about Sebas Swiggum, but Barlage prefers to illustrate the uber-focus and self-discipline of his senior captain with a story.

“We’re coming back from a tournament in Fargo and it was about 6 o’clock. The guys on the team asked if we could stop and get something to eat. So we stopped and everybody got off the bus. There were a couple of restaurants and the kids went in,” Barlage recalled.

“Sebas didn’t get off the bus. He didn’t go into any of the fast food restaurants. I said ‘Sebas, did you get something to eat?’ He pulled out a bag of almonds and held them up. He said ‘I’m not putting that junk in my body.’ That’s Sebas. I’ve got a hundred stories like that. You can’t break him.”

Being unbreakable is Swiggum’s finely sharpened persona. It’s helped lift him from a life that began in an orphanage in Bogota, Columbia, helped him through family difficulties and adversity, and has set him on a path to success he couldn’t have anticipated when he was younger.

He’s become one of the top 138-pound wrestlers in Class 3A, with a 49-2 record this season heading into the wrestling state meet, which begins Thursday and runs through Saturday.

The indestructible shield he’s developed has helped him fight through his own learning impairments to become a 4.0 student and a talented piano player. It’s the reason Swiggum has landed a scholarship to wrestle at the University of Minnesota.

Why in the world would he do anything to jeopardize all of that? 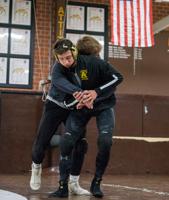 “It’s crazy,” Swiggum said. “I guess it’s all part of God’s plan that I end up here. I always tell people, if I wasn’t adopted, I’d probably be dead in Columbia.”

That randomness, that luck of the lottery of life, motivates Swiggum. He recognizes that being adopted when he was very young was a stroke of good fortune, but that didn’t mean his path would be without ruts. He only has to look at his siblings, older sister Katerine and older brother Alejandro — both of whom were also adopted from the same orphanage in Bogota — to see that.

Katerine was between 4 and 5 years old when she was a brought home. Swiggum said those early years were enough create demons that his sister, now 22 and estranged from the family, is still battling. Alejandro, 21, has had developmental issues from birth.

For the past few years, life at home for Swiggum has seemingly been a series of crises. About five years ago, his mother, Sue, herniated discs her back. “She’s still recovering from that,” he said. “It’s taken years.”

Not long after, complications from surgery landed Alejandro in the hospital for a month and a half. “He nearly died,” Swiggum said.

A little more than a year ago, Sue and Alejandro were stricken with different forms of cancer. “She got thyroid cancer literally weeks after Alejandro got out of chemotherapy,” he said. “It was crazy.”

As tough as the recent past has been for the Swiggum family, the past year has gone far more smoothly. Both mother and brother are currently cancer-free. Steps have been taken to reconnect with his sister. And wrestling, which he admits to hating when he started in first grade, has been there as a comforting salve whenever the other part of his life started to encroach.

“Wrestling has been kind of an out for me,” he said. “If I have something going on with school or my family, wrestling is there to keep me occupied.”

His own issues with learning — “I pick up things about three times slower than average,” he said — has actually helped him on the wrestling mat. It forced him to develop a mental toughness that has carried over into other aspects of his life, including wrestling.

“I’m dedicated to my schoolwork,” he said. “I do my best to excel at that.”

He’s not reluctant to study longer and harder than most, a willingness that has resulted in a flawless GPA.

Just another example of Swiggum’s commitment to success from life.

Next up, Swiggum said, is a state championship. He came close last year, finishing as runner-up to Willmar’s Clay Carlson in the Class 3A 132-pound final.

This week his bracket includes two wrestlers ranked ahead of him at 138 pounds by TheGuillotine.com: Drew Woodley of Northfield and Trey Kruse of Stillwater. It’s a difficult road, sure, but what part of Swiggum’s life hasn’t been filled with difficulties?

“The state tournament, that’s what high school wrestler’s train for,” he said. “I want to move on from this year knowing I have a state championship under my belt. That’s been the goal for the last six years.”

Regardless what happens, Swiggum will have the satisfaction of knowing that he has done everything possible to pursue that goal. That legacy of devotion to his craft will carry over well at Minnesota, where he’ll wrestle and pursue a career as a surgeon.

Barlage, who has coached his fair share of stellar wrestlers as an assistant coach and now head coach at Apple Valley, called Swiggum “the best student-athlete that’s ever gone through here.” Pretty strong praise, considering the level of talent that has worn the Eagles’ singlet over the years.

“I’m not sure we’ve ever had somebody with a 4.0 GPA and be a state champion? How do you get better than that?”