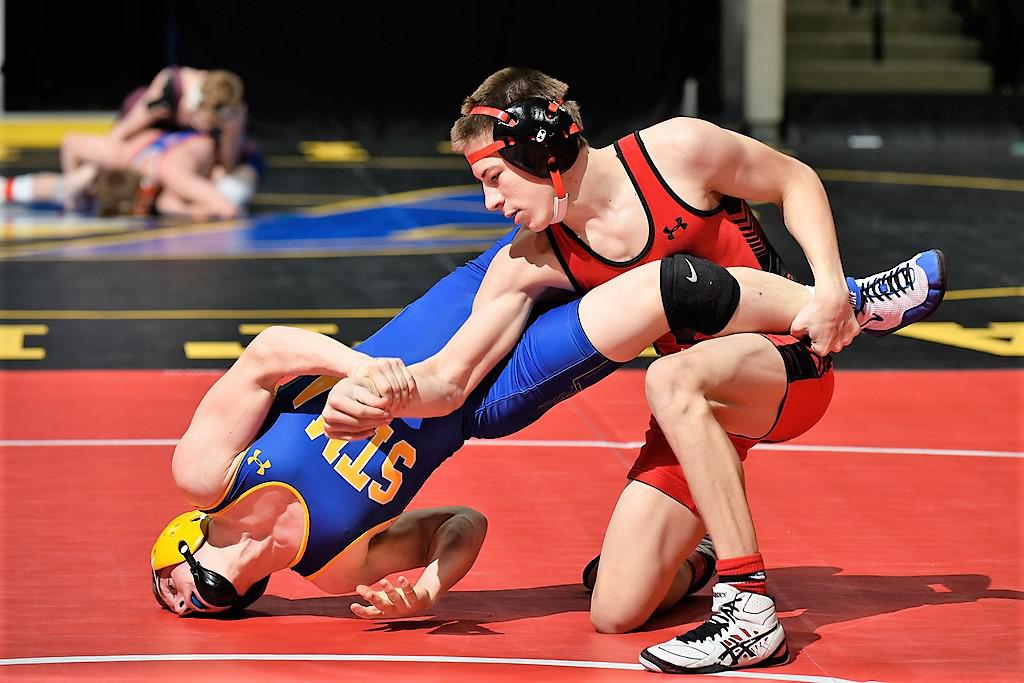 Shakopee's Ben Lunn wrestled against St. Michael Albertville's Brandon Psyk in the Class 3A individual quarterfinals in 2018. Both are competing in this year's meet for their teams and as individuals. Photo: AARON LAVINSKY * aaron.lavinsky@startribune.com

Is this the year Shakopee breaks down the door?

With a nod to legendary Houston Oilers coach Bum Phillips, the Sabers knocked on the door in 2017, barely losing to eventual Class 3A state champion Apple Valley in the Section 2 finals. In 2018, they beat on the door, falling to St. Michael-Albertville 30-25 in the state championship.

This year Shakopee looks every bit like a team destined for the Class 3A state championship. The Sabers are undefeated in dual matches against Minnesota teams. Their record is 34-2-1, but both losses and the tie came against teams from outside the state. They tied Mukwonago (Wis.) in an invitational in late December and lost to Vacaville (Cal.) and Oak Park River Forest (Ill.) at the Clash Duals in Rochester in early January.

“I’m definitely pleased by the direction this program is going,” said Shakopee coach Jim Jackson, carefully selecting his words to downplay expectations. “The kids have been battle-tested with some tough competition this season, and that’s good. But it’s extremely important that we recognize that we have three tough dual matches and that we just take them one at a time.”

Jackson’s reluctance to look ahead is more than just coachspeak. He believes there are few weak links in the 3A field.

Stillwater (23-0) earned the No. 2 seed with a well-known name, former University of Minnesota national champion Tim Hartung, in his first year as a head coach. Last year’s champion, St. Michael-Albertville, earned the No. 3 seed and also has a coach in his first year at the helm, Josh Joriman. Forest Lake, the No. 5 seed, is back in the tournament for the first time since 1993 and will meet No. 4-seeded Bemidji in what could be the closest first-round match. Bemidji won an earlier meeting, 37-29, less than a month ago.

• Worth watching: Emily Shilson is now a senior and wrestling for Mounds View. She’s making her third consecutive state tournament appearance at 106 pounds and trying to become the first girl to win a state tournament match.